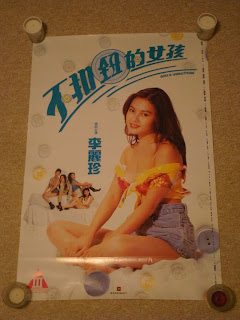 True love seems to escape the free spirited Loletta lee and her two easy friends in Wong Tai-loy's 1994 pic, Girls Unbutton. This inane adult sex comedy is chock full of t&a as Lee and co. show off their goodies, and only those looking for naughty bits need apply. Lee goes full tilt, bearing her ass all over this piece. She pines about love while she bathes, sunbathes, or just lounges around her apartment in the buff. Her co-stars go full frontal and engage in some surprisingly risque sex scenes as they take it every which way. And when there's sex in Hong Kong cinema, you'll find Tsui Kam-kong. Here Tsui plays a triad leader who tears the panties off of and then sticks it too Lee in a back alley. No, not her back alley. In an inspired "heroic bloodshed" sequence, Tsui, post back alley hump, rumbles a rival gang in a loin cloth. Unfortunately he comes out limp.
Director Wong Tai-loy, mostly recognized for his triad opuses Rich and Famous and it's sequel Tragic Hero, both starring Chow Yun-fat, is no stranger to the Cat III genre. His 1989 film, Sentenced to Hang, is reportedly the first Category III film ever released. Here, nudity taking the place of the aforementioned films violence. Nudity. There's a lot of it. Nudity, nudity, nudity...why else would you watch Girls Unbutton? 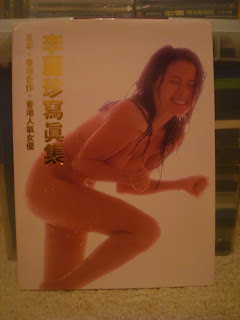 Well, whatever name she goes by, here is an item I bought a few years back off of Ebay. The photobook seemed to be very popular among Hong Kong starlets back in the good old days. This one is a collection of soft nude and non-nude shots of....I shall call her Loletta. Because that sounds hotter.
Posted by Kingwho? at Monday, November 30, 2009 No comments: