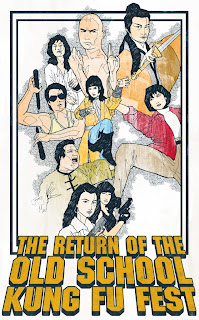 Right on!  For my tri-state area people, this April 19-21 @ the Anthology Film Archives, the fine fellas behind, and in front of, the NYAFF are bringing Old School HK action back to the big screen.  This weekend of kung-fu stylings is in memoriam for one of the NYAFF organizers, Daniel Anderson Craft, who passed away a few months ago, and someone I only got to know for a short while.

This is a be-there-or-be-square kinda weekend in NYC.   Tell your significant other that you can't hang that weekend, call in sick to work, and drop the kids off at your in-laws.  The kids need to see their Nan-Nan and Pop-Pop, whom you've been neglecting to visit because they are old and you don't have time for their nonsense.  I'm going to be there, and if I can make it there (I already put in for a vacation day at work), so can you.   And if I have yet to whet your appetite, then take a gander at the film line-up......RIGHT HERE! 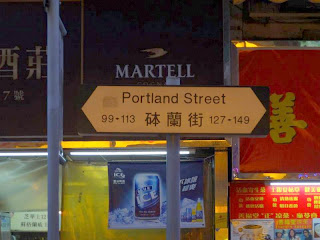 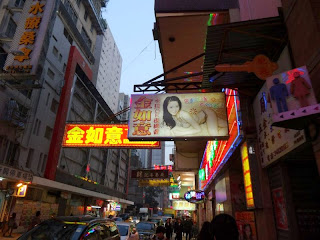 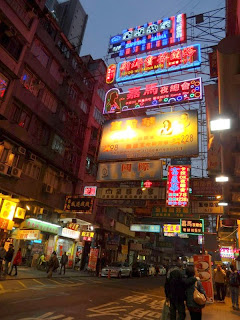 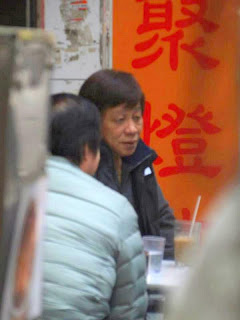 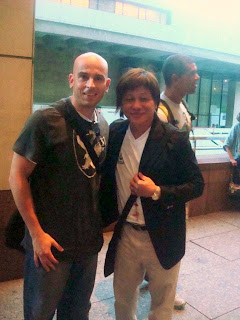 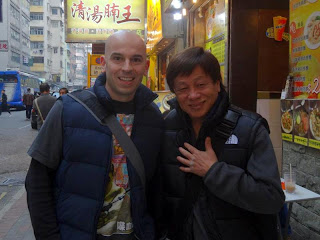 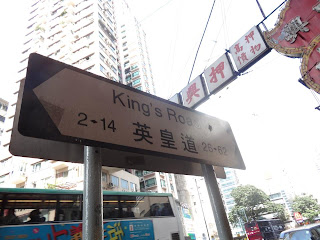 In an unbelievable stroke of luck, my 8 days in HK was a trip for the ages.  And here is one case in point.  Another one or two are to follow in later posts.  But, lets start with this one.  My HK itinerary was chock full of places to go and people to see, and surely on my dance card was a quick stop at the Hong Kong Film Archive. 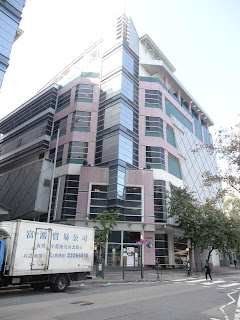 We were stationed in Yau Ma Tei for our stay and usually tried to hit the pavement or MTR early for a full day of visiting.  Out early one morning for a trip and a full day to HK Island, our first stop was the HKFA in Sai Wan Ho.  It's a touch out of the way so we figured we would hit it first and then work our way back towards Central.  There was a King Hu retrospective going on at the Archives but unfortunately, there was no film showing on the day of our visit.  I at least wanted to go and check the joint out and to pick up a film book or two.  And that's exactly what I did. 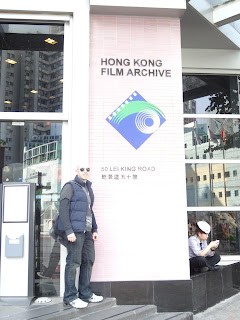 The Archives is just a short walk from the Sai Wan Ho MTR stop.  Maybe a few blocks.  Lucky for us (again, luck!) that the weather was amazing for the entire length of our stay.  It was a nice walk.  Upon entering, the Archive wasn't anything special.  My wife and I were the only ones there, aside from the security guard.  To be fair, it was only a few minutes after opening and on a weekday.  A bunch of film flyers were available to take, and I took.  All of them.  One room on the first level housed an art instillation that wasn't film related but actually the artwork of King Hu himself!  (Thanks YTSL)  So, after perusing the masters artwork, we made our way to the elevators to head up to the second floor where the King Hu film exhibit was stationed.  As the elevator doors opened, my wife and I stood aside to let the handful of people exit.  And as I smiled and slightly bowed my head at the exiting passengers, I did the double takes of all double takes.  Well, at least it was the double takes of all double takes since the previous double take of all double takes I had a few days earlier.  We'll get to that one in a future post. 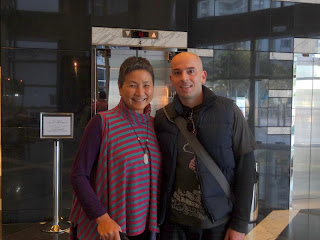 My legs instantly turned to wet noodles and my heart skipped several beats.  In a heat flash, I wasn't married anymore.  Instantly knowing that I knew who she was, a lovely ear to ear smile spread across her face as she slightly bowed her head, as I had done.  She, and her party, exited the elevator and walked on as my wife and I entered, and pressed the button for the second floor.  The doors closed and I shit my pants.  Clutching the walls and my wife's arm, I said, "Do you know who that was? Oh my god!  Holy shit!"  My wife is mostly clueless in the ways of HK cinema and, of course, had not the slightest clue.  "That was Cheng Pei-Pei!"

-
We got off of the elevator, my legs still gelatin.  We looked around the King Hu exhibit for maybe 5 seconds, none of it registering.  My wife, getting a kick out of me being a blubbering mess, coerced me back downstairs to try and get a picture or an autograph.  Back downstairs, swimming in sweat, we discovered Pei-Pei and her party looking at the art instillation.  Not wanting to bother her, we milled around the lobby like two sketchy dummies for about 15 minutes until she emerged.  I know that Pei-Pei can speak English, but I'm a wuss and asked my wife if she could ask her, in Mandarin, for a picture.  I'm more than a wuss.  A starstruck puss*.  Pei-Pei entered the lobby and my wife approached and kindly asked if she would take a picture with me.  She was more than happy to oblige this losers request, as you can see by the above pic. That smile!!!!  Love was in the air.  I was too nervous to talk to her or gush at how I'm such a big fan.  After the picture, I slightly bowed my head again, said thank you, and got the heck out of there.  Puss*. 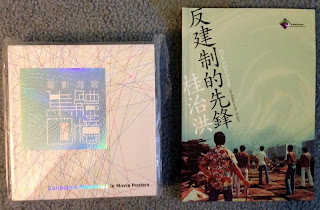 I left the Archives floating on HK's polluted air.  I had stepped in shit with this chance meeting.  Was it luck?  Was it meant to be?  And Ms. Cheng was the 2nd actor I 'bumped' into on the trip.  Luck, man.  I tell ya.  Oh.  And I bought the two above books at the Archive.  Did I forget to mention that? 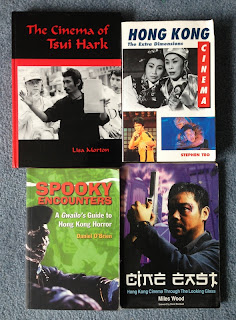 My HK/Asian cinema books.  They are usually never stored away for too long and always available to thumb through if need be.  I think I may have misplaced a few throughout the years through house moves or just neglect.  And a few might still be stored away as my HK movie collection is still in disarray since the big move last summer.  But, here they are.  In all of their good, bad, and ugly HK film info/mis-info glory. 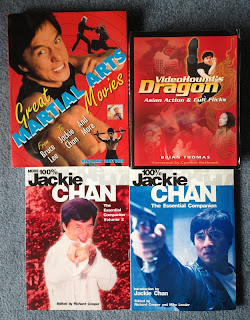 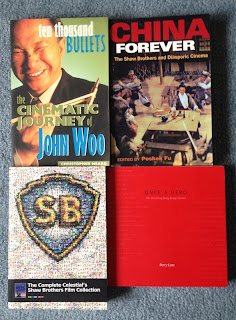 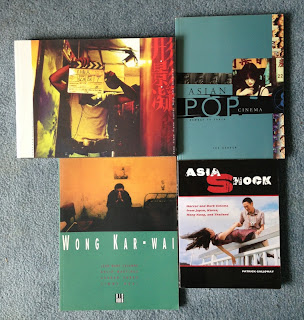 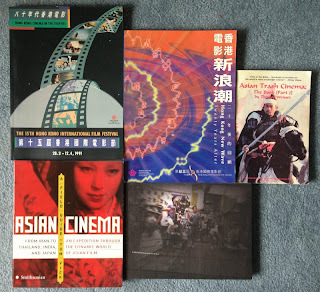 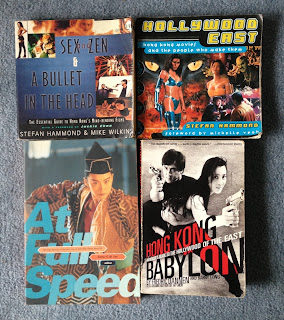 My two absolute favorite books on HK cinema, SEX AND ZEN & A BULLET IN THE HEAD and HOLLYWOOD EAST.  Both by Steffan Hammond.  The absolute COOLEST books around. 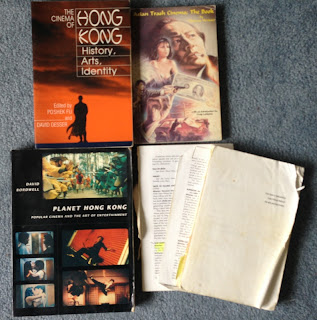 Bottom right is my first book on HK cinema and my most dogged.  It is also considered one of the worst because of a s**t-ton of misinformation.  That being said, the mis-info makes it that much more fun to read through.  Ladies and germs, I give you, Thomas Weisser's ASIAN CULT CINEMA. 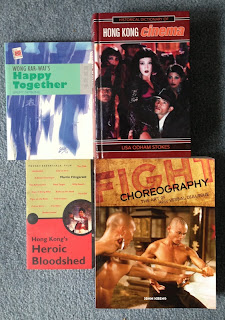 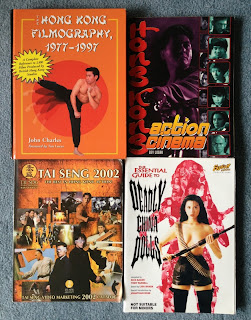 Upper left is one of the HK film review book bibles.  The must own, John Charles' HONG KONG FILMOGRAPHY: 1977-1997.  You can find the updated publication HERE.  Also, bottom right, is the picture laden DEADLY CHINA DOLLS, of Eastern Heroes fame, which runs the gamut with loving info on lady kung-fu stars to filthy CAT III starlets. 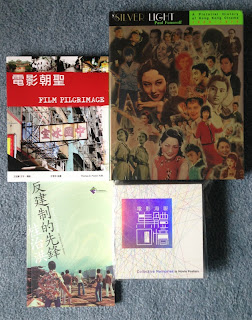 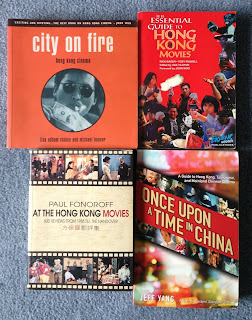 I have a few books that I am currently eyeing.  Just waiting for some moolah to free up.  Are there any books that I'm missing?  What should I add to my library?
Posted by Kingwho? at Wednesday, March 06, 2013 5 comments: