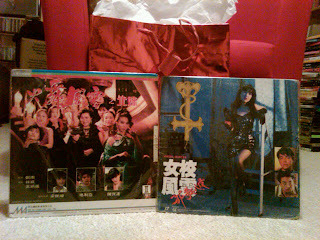 Another filler post here as I'm leading up to something pretty cool in the next week or so. Stay tuned! Anyway, this past Thursday Wei and I celebrated Valentine's Day a bit early. Dinner at The Melting Pot and gifts, gifts, gifts! I would have much preferred to eat at Taco Bell but it's not always about what I want. Right?! But, the gifts were damn excellent! Wei bought me the above laserdiscs, WHORES FROM THE NORTH and the kinda rare ANGEL HUNTER. I have been waiting to see ANGEL HUNTER since I first read a review of the film at the outset of my HK movie watching days. Friday morning I dove straight in. And it did not disappoint. The film is stellar. Stylish and wild with an eerie feel throughout. It's populated by all-stars, Anthony Wong Chau-sang, Carrie Ng Ka-lai, Ng Man-tat, Vivian Chow Wai-man and Lau Ching-wan. Admittedly, most of the players appeared during their 'before they were stars' years but this is no skeleton-in-a-closet flick. It supposedly sat on the shelf for a year or two before being released in 1991. I really can't see why? Perhaps the subject matter, concerning religion, was a bit too taboo? Or maybe they felt the subject wouldn't scratch where film goers itched? The film isn't chock full of flavor of the day action scenes but a slow burn of creepy drama, a few out of place comedy bits, and absolutely fantastic performances. And for the action hounds, the finale is a stud, filled out by Yuen Bun and Yuen Kwai. My favorite write up of the film is a great quickie review over at HKMDB which states: "Satanic Cult recruits schoolgirls, and then bad things happen to them. Police decide to investigate." While not 100% accurate (police really aren't in on the mix), this is the type of review that I love to read. Short and sweet. If I were ever to do my own website or write a book on CAT III film reviews, that is how a review would go. I would only add that the film runs about 99 minutes and there is a smattering of nakedness. Brief synopsis, running time, and raunchy content. Now the review is complete. Perfecto. 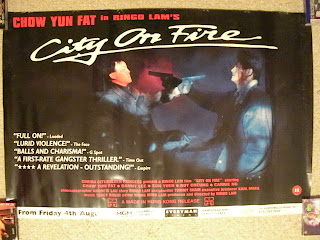 It seems like it's been forever since I posted anything from my poster collection. Remember when posters where an integral part of this blog? I have so many more to show. Maybe I will get back to my roots this year? We'll see? This poster is in response to a blog buddy of mine, A Hero Never Dies. He showed me his so now I have to show him mine. Er, rather he showed me his HARD BOILED UK Quad poster so I am showing him my CITY ON FIRE UK Quad poster. I think mine is longer? But Wei tells me it's the width that counts. Is that true?

A few videos here for you to enjoy. Up top is the wet and wild scuba girls-with-guns action romp, LUNATIC FROG WOMEN aka VIRGIN COMMANDOS. The film features the legendary Cheng Pe-pei in an odd starring turn. Ms. Cheng must have needed to pay the rent that month?


A quick clip here from my absolute favorite film from 2010, Pang Ho-cheung's DREAM HOME. Josie Ho Chiu-yee's performance is fantastic and award worthy. This clip is kinda SFW, meaning just a heck of a lot of violence and no naked bits. The film has a ton of both. Such a goodie. Click HERE to relive my DREAM HOME journey and hear me make an ass out of myself as I ask Pang Ho-cheung a question at a screening of DREAM HOME at last years Tribeca Film Festival. Enjoy the clip and remember to check back, hopefully, this coming week. Some fun stuff ahead at Bullets Over Chinatown.
Posted by Kingwho? at Saturday, February 12, 2011