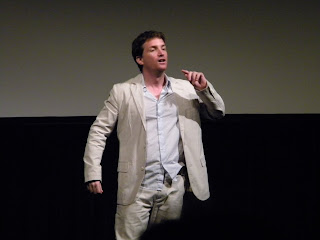 Not updating as much as I would like. It's summer time and I have better things to do. I like to pretend I have some sort of a life off of my laptop. So, i'm finally getting around to posting the rest of my 2010 NYAFF pics. These pics are from day 2 of the fest. Wei and I were there to see an awesome screening of the Sammo Hung Kam-bo clssic EASTERN CONDORS as well as the Award Winning drama ECHOES OF THE RAINBOW starring Simon Yam Tat-wah and Sandra Ng Kwun-yu. Both Sammo and Simon were in attendance so I was giddy like a school girl. The above pic has Grady introducing EASTERN CONDORS in that special Grady way. Post EASTERN CONDORS was a wonderful Q&A with the great Sammo Hung Kam-bo. It ran about 25 minutes and Sammo was hugely funny and animated as he recalled his career. I am still working on the videos. 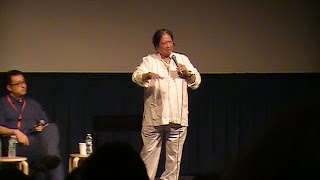 Sammo begins to tell an anecdote about travelling with Yuen Biao 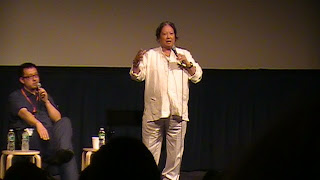 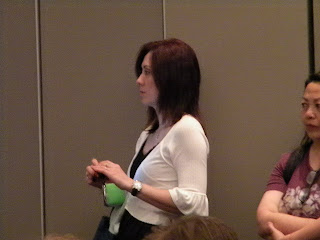 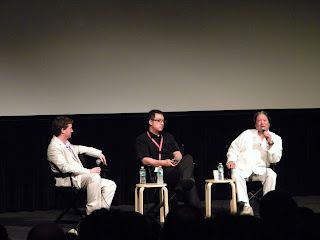 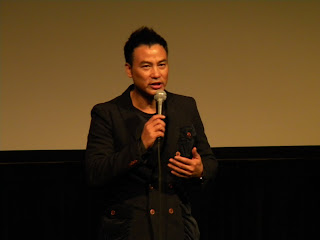 Simon Yam Tat-wah
-
After the Sammo Q&A Wei and I stuck around to check out the North American Premier of Simon Yam Tat-wah's award winning performance in ECHOES OF THE RAINBOW. Simon was introduced before the screening to say a few words. A genuinely warm and funny man, he tried to elicits laughs out of the audience. He went over pretty well. He then told us that he is going to try his hand at comedic films in the near future. So, keep an eye out for those opuses.
-
ECHOES OF THE RAINBOW turned out to be a bit of a letdown. Overly dramatic in spots and cringe worthy moments of sap, especially the ending, mars the film from being a winning period piece. Yes, I understand the film IS a drama. But it was more like an 'Illness of the Week' TV movie. Did I give to much away? Someone gets sick and dies. Sorry for the spoilers. A few moments seemed overwrought....especially the ending. This backhand aside, the performances were quite excellent. While Simon and Sandra are the top names, they are but part of an ensemble that takes a back seat to newcomer child actor, Buzz Chung Shiu-tiu. More often than not child actors are screeching sight gags that I would rather see and not hear. Buzz almost completely owns the film. The narrative is seen through his young eyes. He's a mischievous scamp who gets himself into all sorts of trouble. These funny scenes nicely balance out some of the mushier moments of the script. Another part of this good looking ensemble is Aarif Lee Chi-ting, who plays the older brother of Buzz. A newcomer as well, Aarif has recently been cast as Bruce Lee in Raymond Yip Wai-man's Bruce Lee biopic, BRUCE LEE, MY BROTHER. Simon and Sandra's film history speaks for themselves. When you put a small film like ECHOES OF THE RAINBOW in the largely comforting and assured hands of these two talents, you have little to worry about. Simon is currently acting his age with immense knowledge of his craft. He has 150+ films behind him as well as a bunch of TV series to his crazy resume. I think it's safe to say that he understands acting. No? Sandra, when she wasn't mugging for the camera, had always filled the screen with charm and a sense of wit. Shit, even when she WAS mugging for the camera she showed understanding for film language. ECHOES OF THE RAINBOW gets a marginal recommendation. It's a fine nostalgic piece, that is funny, and sometimes genuinely touching. Sometimes. Wei cried her eyes out if that's any help? But she's a girl. They always cry.