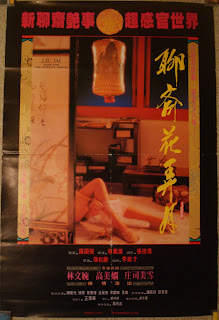 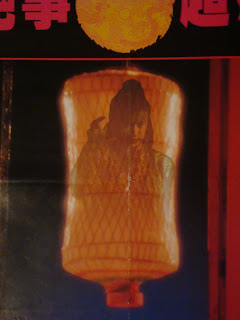 Of interest, to me at least, is that the starlets on display in the film aren't the usual band of bang-abouts.  No Rena Otomo's, Yau Yuk-yue's, or Chan Poo Kei's.  These no name nubiles shed their clothes and we are all the better for it.  Much, much, much skin is on display (and I even spotted a third input!).  These lovely hirsute maidens look to have Buckwheat in a leg-lock, but I suppose their untrimmed hedges were part of the actresses immersing themselves in their period piece roles? 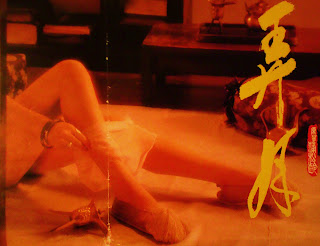 Lam Yee Hung can be artsy fartsy when he chooses, praying at the altar of Ho Fan, but usually keeps it low brow enough to not cross over into 'art over smut.'  The smut to art ratio lovingly favors the former.  Charlie Cho livens things up as a taoist Ghostbuster who uses his 'ghost-fu' to do away with the naughty specters.  There's also an appearance by Shaw hottie Siu Yam Yam, who was pretty prolific in the early 90's CAT III era, even adding story, planning, and writing credits to her naughty legacy.  The T&A on display is only half the fun.  Wire work fisticuffs and laser-beam effects push the film over into pure joy.
Posted by Kingwho? at Tuesday, December 20, 2011