While in HK, I made it a sure point to visit some HK filming locales.  I consulted a few cool blog/websites, like HONG KONG ON FILM, and asked a few Facebook friends who either live in or have visited HK.   One friend joked that ALL of HK was a filming locale.  At the time, I just thought he was being a smart ass but while in situ, I immediately saw that he was speaking the truth.  So, while making our daily itinerary I was able to insert some locales to hit up while on our walkabouts.  Does the building above look familiar?

On the left, circa 1992, it was the tea house, where the infamous Chow Yun-fat shootout (my favorite action sequence ever!) took place in John Woo's HARD BOILED.  It's located at the intersection of Soy St. and Shanghai St., in Mongkok.  Today it has cutesy little puppies painted all over it.  Oy vey.

This location was one of my own design and I'm not quite sure if its the exact locale.  The similarity in the 'SAN FRANCISCO' neon sign on the right point to me being correct.  But lets just say it is because the film that it's from is a raw classic.  While pounding through the seediness of night time Wanchai with my wife and a friend, I located Club San Francisco, on Lockhart Rd..  On the left, circa 1988 in HER VENGENACE,  It was the club where Pauline Wong and Lam Ching-ying worked.  Today, it's all shiny and updated and ready for some dirty after dark, low down trade.

Ok.  Not the greatest shot of this location and really nothing to write home about, but while on a walking tour with a friend on our last full day in HK, he directed me toward Tom Lee Music on Cameron Ln., in Tsim Sha Tsui.  Above, left, is a scene from Johnnie To's PTU made in 2003. Thirteen years later, Tom Lee Music, or the building it's in,  appears to be going through some renovations.

And here, at the intersection of Temple St. and Kansu St. in Yau Ma Tei, is a locale from Herman Yau's exceptional 2007 film, WHISPERS AND MOANS. 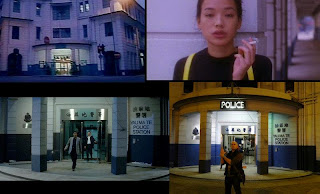 This locale is also located in Yau Ma Tei, and since our hotel was only a few blocks away, we passed by a few times.  It's the quite HK film infamous Yau Ma Tei Police Station.  Above, clockwise, Shu Qi in PORTLAND STREET BLUES (1998), me-being a silly ninny (2013), ELECTION (2005), and DR. LAMB (1992).  I would like to extend my great thanks, once again, to HONG KONG ON FILM, for use of the above pics. 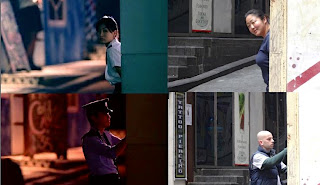