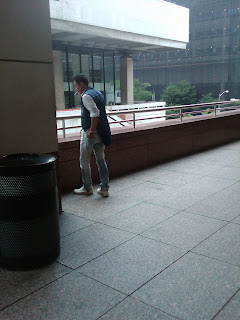 On the Sunday of the fests opening weekend I had tickets to see the Pang Bros. CGI craptacular, STORM WARRIORS and the Teddy Chen Tak-sum epic BODYGUARDS AND ASSASSINS. A few days before the fest a facebook and HK film cohort, Ian Friedman, who is part of the cool blog HK and Cult Cinema News (check out my blog roll for the link), messaged me and asked if I would like to tag along while he interviewed Simon Yam Tat-wah for his blog? I think ya'll know my answer? After dropping quite a massive wet one in my drawers, running around my apartment, and screeching like a little school girl, I of course said, "sure." Initially I was just on board to maybe snap a few photos but I got my hands on a chintzy video camera and a full fledged video interview was born. 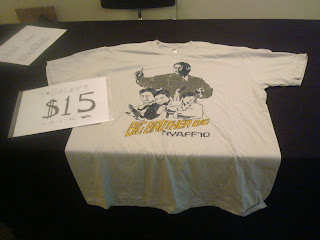 I had to forgo the screening to STORM WARRIOR to be in on the Yamtacular interview, but I wasn't to broken up about. I have the DVD and probably won't get around to it anytime soon. Got to the theater a bit early, and as I was walking toward the entrance, Simon was walking out. Deer in the headlights. I stuck around outside, gawked and stalked a bit as Simon spoke on the phone, sipped coffee, and puffed a smoke. As wetness trickled down my moist thighs, I snapped the above shot of the back of his head. As Simon finished his call, coffee, and cig almost simultaneously, I approached my HK idol and introduced myself. He was extremely gracious and welcomed my handshake. I told him how much I enjoyed the previous nights screening of ECHOES OF THE RAINBOW (ok, so I fibbed a bit. So what of it?) and how my fiance cried her eyes out. He appeared grateful. We left it at that. With a big grin on my face, another handshake, and a wave. He went back inside and I headed to the bathroom to clean my jeans. 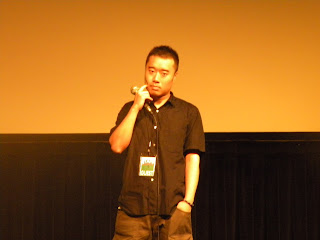 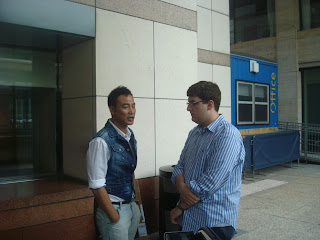 Ian Friedman and Simon Yam Tat-wah
-
30 minutes or so after my Yam meet and greet, Ian and I were allowed 15 minutes or so for a chat up. Simon suggested we do the interview outside and who were we to say no? I knew my video camera was going to have sound issues capturing Yam and his soft spoken voice with the NY street ambiance obtrusive as it always is. And it was. I positioned my camera, pressed record, stood back with a few Yam handlers and other oglers, and wet myself a second time. Ian and Yam were great. It was a fun interview and it actually looks pretty damn cool. The one problem is the sound. It's almost inaudible. Ian is going to try and jack up the audio somehow and maybe add subtitles? So, hopefully we can get the interview up shortly. It's nothing hard hitting or earth shattering. But it was fun. 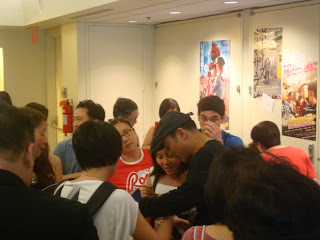 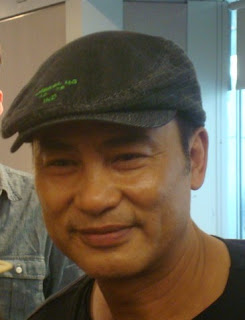 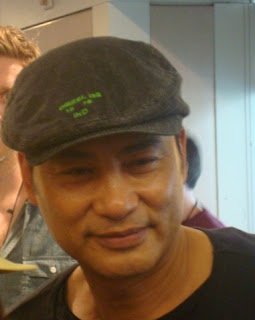 Cooler than the other side of the pillow 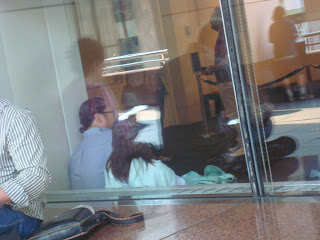 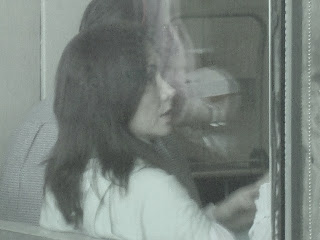 After the interview I stuck around for the screening of BODYGUARDS AND ASSASSINS. I had seen the film already on a good looking Mandarin language Taiwanese print. It was even better on the big screen. A few issues here and there with pacing but easily overlooked as the exposition stalls for an hour long foot and fisticuffs corker of a finale. Before the film, the fest screened an hour long documentary on the perilous journey B&A took from script to screen over a few decades. Director Hiroki Fukazaw was on hand to intro this film, DEVELOPMENT HELL, along with Grady Hendrix. While not the best documentary you are bound to see, some bits were particularly interesting. Purporting to show the B&A production as 'bad luck' the film takes a turn and follows the poor luck of filmmaker Teddy Chen Tam-suk as he literally goes through muck and mire developing and filming his previous movies. If behind the scenes shit doesn't crap up poor Teddy, his mother also passes away. Filming parts of his mother's funeral and its actual inclusion in the film, while initially questionable, is quite touching and left a lingering impact. If there was anybody you wanted to see come through and make B&A, it was Teddy. I have heard/read conflicting reports on the release of the documentary. At the fest it was reported that the film was never going to be released and director Chen and producer Peter Chan H0-san wish to not even have the film screened at festivals. If this was truth or a joke, it was lost on me. I have also heard that the film will be included in a HK DVD release packaged with B&A. We'll see.
-
After the film I hung around for a bit and was able to take a pic with Simon and have him autograph my copy of his hey day CAT III flick ( and my fave CAT III film) RUN AND KILL, as well as a copy of ECHOES OF THE RAINBOW. Really not an autograph whore, but Simon holds a special place in my world. I also have a great photo with him. His arm wrapped around my back, hand on my shoulder. My arm wrapped around his back, hand holding his side. It's very homoerotic! hahaha Toying with the idea of throwing it up on the blog along with other pics of me and other HK cinema related folk. What do you guys think? Should I plaster my mug on the blog? I'm not sure? My facebook profile has a ton of pics with my Michael Berryman-esque noggin' front and center.
-
Leaving the theater, I headed down the escalator, speaking to Wei on my cell. As I got to the bottom of the escalator I looked up. Stepping on to the 'up' escalator was Sammo and Joyce. I paused mid-sentence with Wei (I think I may have hung up on her?), and wet myself for a third time. My eye caught Joyce's and she did a double take. Her eyes were wide, beautiful, and a bit weary. The whites seemed an odd electric purple color in the late afternoon haze. Stepping off the escalator I froze. A minute or two later, after I regained use of my legs, I ventured back up the escalator. Sammo and Joyce were inside the venue and I was able to take a few stalker like shots of the two. I picked up my conversation with Wei again, as I hung up on her upon seeing Joyce, and headed home to sprinkle baby powder on my soggy nether regions. Damn fine opening weekend.