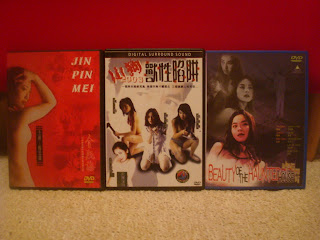 JIN PIN MEI, DEADLY CAMP 2003, BEAUTY OF THE HAUNTED HOUSE
-
Been a while since I showcased some of my collection. Ahhhhh....back to basics. JIN PIN MEI is the first in a series of 5 or so 'historical' bangabouts based on an ancient Chinese novel. The novel, The Plum in the Golden Vase, has also been recently updated in the Cash Chin man-kei directed SEX AND CHOPSTICK series. I have only seen the first film in the JIN PIN MEI series, pictured above, and it's boobie abundant. The film has a certain cheap charm but it doesn't scrape the fun 'historical' muck tapped a few years earlier in SEX AND ZEN. DEADLY CAMP 2003 is a made on the cheap nudie thriller that is a slow haul. A bunch of idiots set off for a remote island and....you know where this is headed. While there are bouncing body parts on display, which is always a good time, this is a film you will need to prop your eyelids open with toothpicks to watch. It co-stars Tony Ho Wah-chiu, a respectable character actor and an actor I happen to really like. The early 2000's was a tough time for most everybody, so I will give Tony a pass on this one. At least he had the good grace to star in a film with ninnies in it! BEAUTY OF THE HAUNTED HOUSE is a cheap and silly nudie movie. The kind I could watch all day long. It's not a scary flick like the title may suggest, but a ghost comedy....with beautiful naked bits strewn about. Directed by female director Ka Ka. She played prostitute #4 in Fruit Chan Goh's DURIAN, DURIAN. Just so ya know. 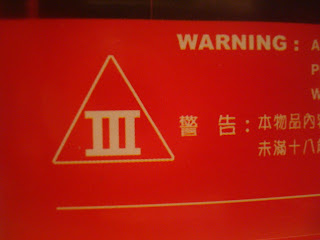 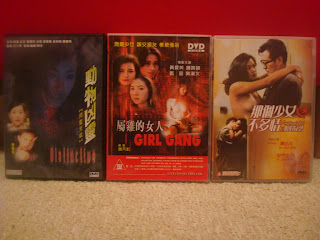 DISTINCTIVE, GIRL GANG, EMOTIONAL GIRL-DOUBT OF DISTRESS
-
DISTINCTIVE is a slow moving peanut filled turd of a movie. It's billed as a CAT III horror flick that is totally void of any CAT III attributes. Absolutely zero boobs, butt, bush, or blood. The film stars Cecilia Yip Tung, Ku Feng, and Chan kwok-bong. The first film directed by some schmo named Agan. Beware. He's still getting regular work. DISTINCTIVE is torturous in every way. GIRL GANG aka SEXY PLAYGIRLS, is a fairly decent troubled chickie youth drama from 1993. Troubled youth pics were abundant around this time and always concerned idiot youths. So, that staple is used here as well, as silly girls make some bad decisions and get roped into the triads and forced to be prostitots. Brief naked bits but it's still good times! EMOTIONAL GIRL -DOUBT OF DISTRESS, is another flick that lurches about like people really came to see the drama. We want the good stuff and lots of it! T&A is A-OK! We do get some naughty bits to leer at though. Trampy Julie Lee Wa-yuet goes full-bore and in one scene rubs her brillo pad against Chang Kuo-chu's face. Cecilia Yiu Ching-ching also shows her enhanced top half for the fans. I'm not one of them. Frankenstein parts are not for me.
Posted by Kingwho? at Wednesday, August 18, 2010