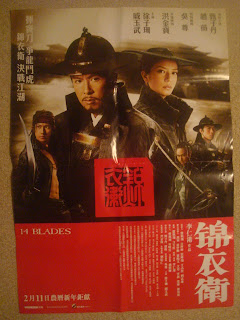 Poster for the Daniel Lee Yan-gong directed martial actioner, 14 BLADES, headlining Donnie Yen Ji-dan. I am not a fan of Daniel Lee Yan-gong who has also graced up with the empty WHAT PRICE SURVIVAL, BLACK MASK, A FIGHTER'S BLUES, DRAGON SQUAD, and the almost good THREE KINGDOMS: RESURRECTION OF THE DRAGON. His films are too sleek looking for me and appear to be rooted in the new, pretty looking HK cinema sensibilities. 14 BLADES isn't a total loss though. There are some nice fight sequences. A memorable fist to fist sequence even pits Yen against HK legend 'Big Brother' Chen Kuan-tai. Kate Tsui Tsz-shan appears as a baddie who sports braided hair that more resembles the Rastafarian look honed to perfection by the PREDATOR in the movie....well....PREDATOR. Ridiculous. Vickie Zhao-wei is in this mess and seems to be the go to chippie for HK/Mainland co-produced crap period actioners. 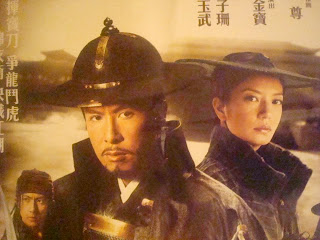 I watched 14 BLADES a few months back and the film was instantly forgettable for me. Looking to beef up this post, I breezed through the film again. I entirely forgot that the great Sammo Hung Kam-bo co-stars!? How the hell does someone forget Sammo Hung in a movie? Either I better start consuming more omega-3 or this film is tired? I will choose the latter.
-
And for the ladies....and some of you gents, Mr. Yen takes his shirt off for a bath tub scene. He bathes in the tepid waters of his own narcissism. Rub a dub!
Posted by Kingwho? at Monday, August 30, 2010