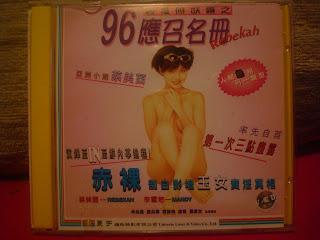 REBEKAH (1996)
-
The beautiful and top heavy Cammy Choi Mei-lan headlines this ribald CAT III romp where the main attraction is Cammy's mammaries. Cammy plays a struggling nightclub singer who uses her enormous charm(s) to get ahead (man, these puns are awful. Apologies.) Cracking through into the film biz, Cammy is employed as a CAT III thespian, which quickly looses it's luster as she is used and abused by the films director as a piece of meat. Ditching the jade screen, she heads behind the scene's and uses her Russ Meyerian proportions as a PR/PA for the film company. 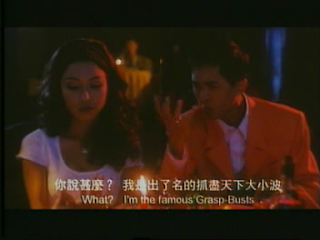 CAT III or bust!
-
In 1993, Cammy won the 'Most Photogenic' award at the Miss Asia Pageant. And photogenic she is. Her claim to fame though, with the boobies obsessed CAT III moviegoer, was her gargantuan ninnies. In REBEKAH, they are lovingly on display, flopping this way and that, to the admiration and growing groins of CAT III lovers, i'm sure. Enormous rack aside, REBEKAH is a filthy and fun film that operates in it's own tasteless world. The kind of world where bangin' guys in the john and running a train on a prostitute is ok. When characters in REBEKAH acquire 'VD' due to their prurient behavior, they visually sport a ton of red dots all over their faces. Now doesn't that sound like a film that is worth your time? Cammy's film career was unfortunately short, only logging time in 4 films. She also bounced around in the wonderful Otto Chan Juk-tiu's 1996 CAT III horror nudie, DEVIL'S WOMAN, again, sans blouse, and lent her curvaceous figure to the godawful turkey, HONG KONG SHOWGILRS, opposite other CAT III strippers, Veronica Yip Yuk-hing and 'Mystical Breasts' Dian Pang Dan. The latter film is a CAT IIA clunker that almost drove me away from HK cinema completely. Avoid it like a carny.
-
Below is a brief scene from REBEKAH, where we see why Cammy left the glitz and glamour of the screen to become a high profile mamasan. Is there a difference in occupation, really? A 'whore' in front of the camera or behind? That appears to be the flimsy question proposed by the filmmakers here. Then again, maybe the film is not trying to be smart at all? I always find myself trying to make meaning out of muck. Maybe REBEKAH just is what it is. That's not a bad thing. Jimmy Wong Shu-kei appears in this clip and riffs on Anthony Wong Chau-sang's 'Bunman' character from THE UNTOLD STORY. Pleasing stuff. Enjoy!