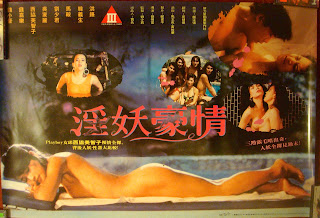 Here's another new comer to the stable and quite possibly my new favorite poster, supplanting the boobilicious Cammie Choi-REBEKAH poster that I once claimed to be my tops.  Ladies and gents, I give you HERO DREAM (1992).  HERO DREAM is a CAT III HK sex/action romp cheapie that once seen is not quite forgotten.  Well, in it's entirety anyway.  The film's claim to fame is not it's fine cast, consisting of the brothers Chin, Ka-lok and Siu-ho, Michicko Nishiwaki, and Carrie Ng.  Or it's swift heyday energetic action, one cool scene even set to music ripped from Miami Vice.  Nope.  The movies most mentioned scenes are of it's surprisingly liberal display of some of Thailand's homeliest transsexuals. 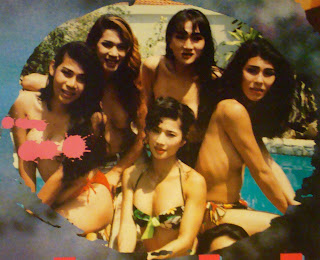 Michiko Nishiwaki and her harem of ladyboys.  Michiko looks delighted.
-
HERO DREAM displays shemales like a menagerie of curiosity also using them in the classic Chinese cinema 'Jade Vase' sense as they are either scenery or abused beyond freakin' belief.  Not only are they used and abused for our CAT III enjoyment but they are shown in various states of undress including full frontal!  The full frontal, I believe, providing a sense of shock value to this run of the mill story but also a curiosity in that HK films, up to this point in time, really didn't show, ummmmm......"male" members in it's cinema.  Oh sure, you saw a ton of little kids running around without clothes.  And sometimes Stephen Chow would flick a poor little kids shmeckle.  But nothing this blatantly adult was on view. 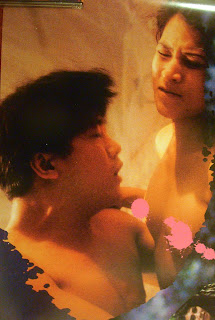 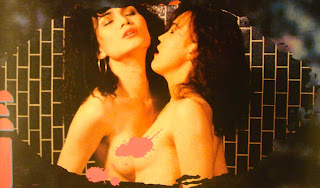 If you were to watch this film today, these scenes, though eye-opening, are none too shocking as 20 years on from HERO DREAM's initial release, alternative lifestyles tend not to be a big deal.  Well, among most people (I hope?), and I would assume not too many of the folks that watch genre or exploitation oriented cinema, Asian or otherwise, would really bat an eyelash.

-
HERO DREAM also sports super sexy lady action heroine Michiko Nishiwaki's most racy film appearance as she also strips down, as seen in the pic below.  Though it's no real picnic for the pervs as the goodies aren't seen.  Sorry, gawkers.  This being said, the film is still a ton entertaining and a recommended piece of solid high trash art.

Mmmmmmmmmmmmmmichikooooooo!
-
I can't wait to frame and mount this pic in my new house.  I'm thinking the bedroom.  Right over the headboard.  I'm sure if I ask my wife nicely she'll be ok with it.  Right?
Posted by Kingwho? at Thursday, July 05, 2012