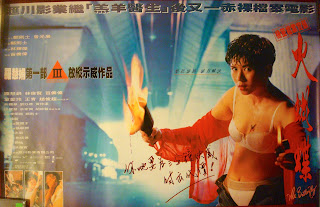 A few weeks back I got that itch.  Not the one that invades your undercarriage on hot summer days (though not unlike it).  But it was an itch that I HAD to scratch.   It was time to order more HK movie posters.  Not that I need anymore, really.  But it's an itch.  An oh so beautiful itch that I never mind scratching long and hard.  I spent a pretty penny on about 10 posters straight from HK, and they arrived this past Saturday.  Imagine my feeling coming home after a few flicks at the NYAFF to find a poster tube delivered by Ms. Mail Lady.  Also in the post were a few VHS I had forgot I ordered.  Like a freakin' kid on X-mas. 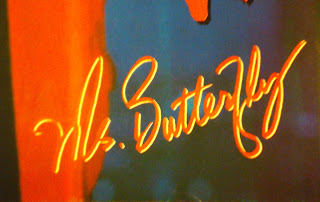 Earlier that day I awoke to a few Facebook posts about the passing of HK actress, Jacqueline Law Wai-guen.  Ms. Law succumbed to pancreatic cancer the day before.  As Ms. Law has been far removed from the HK cinema scene for some time, only popping up occasionally in a minor role here and there, she had been placed on my minds back burner.  And honestly, I didn't even know she was ill? 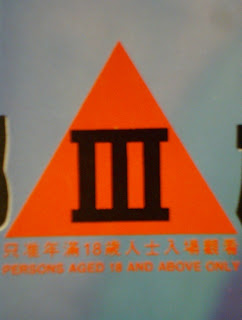 Since the delivery time from HK can take a while I was actually curious to what I had ordered?  I had completely forgotten?  As I teared into the poster tube I prayed I didn't stab myself or lop a thumb off with my scissors.  I unrolled sheet after sheet with anticipation and smiled like a mental patient.  After the final poster was undone, I was confronted, face to face, with Jacqueline.  A quick heat flash of 'Holy-Shit' shot through me and at the same time was elated over this awesome poster and sad for Jacqueline's fate.  Taken way too young. 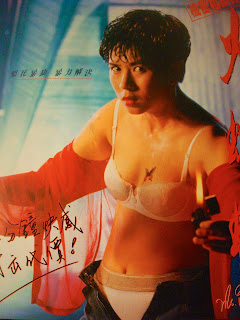 This MS. BUTTERFLY poster has almost immediately become one of my favorites.  A true to form advert from the heyday to put asses in seats.  A decent crime film centering more on females delinquency rather than young triad rascals, the films CAT III rating comes from it's over use of expletives.  Also, this sexy look at Jacqueline, all 'girls unbutton'-like with her bra and panties blazin', is never seen in the film.  I have seen MS. BUTTERFLY only once.  I have the LD and VHS, unfortunately neither come with English subs.  If any of ya'll are aware of an English subtitled copy, please point me in the direction of it.

-
For more on the passing of Jacqueline Law Wai-guen, check out these links: