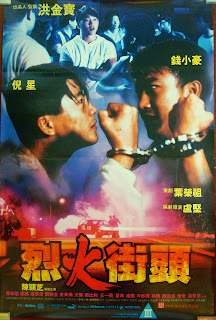 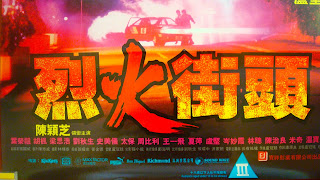 Another Sammo Hung Kam-bo project sans the rotund one himself in front of the camera.  Instead of occupying the directors chair, as he did with SPOOKY, SPOOKY (find a few posts down), Hung produces this late 80's action-drama and hires out his stunt team so they can pay the rent. 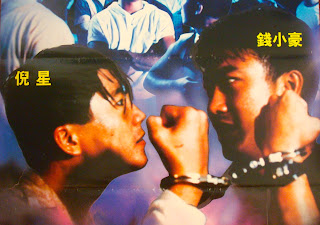 Unfortunately, INTO THE FIRE, despite Hung's hand and this absolutely cool looking poster, is largely lackluster.  This is Sammo's first and only foray into the CAT III realm of the dirty, alas, no nipples on display.  Just foul Cantonese.  Colin Chou and Chin Siu-ho play brothers caught up in the dark side of HK and are actually finely cast, both for their martial skills as well as their young stud looks.  Both are incredibly wasted as turgid drama just blankets the film only sputtering out action few and far between.  Nonsensical considering this is a Hung production with two capable martial leads.  Also cast in the film in a rather meaty role is the the then newcomer, my pixie cutie-pie sweetheart, and usual CAT III sexpot, Chan Wing-chi.  Chan was busy back in good ol' '89 as INTO THE FIRE was her 7th film that year.   In the coming years, Chan lovingly turning her attention to the seedier side of Chinese Hollywood.   Hooray!
Posted by Kingwho? at Thursday, August 23, 2012