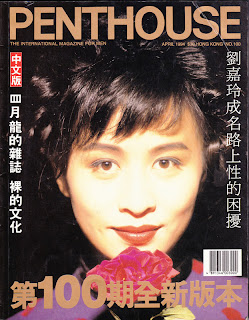 Another week comes and another batch of HK nudie mags arrive at my doorstep.  What a wonderful world.  The glorious visage that graces the April 1994 version of Hong Kong Penthouse is that of the damn fine Mrs. Tony Leung Chiu-Wai, Carina Lau.  Of course, Mrs. Leung doesn't do nekkidness so there is only what Penthouse calls a 'Star Focus' article on her film career.  Still awesome nonetheless. 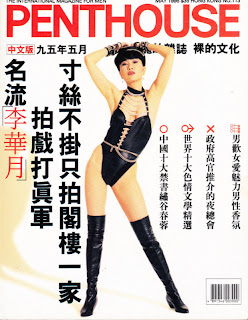 And now we jump from an actress who never sheds her threads to one who not only drops trough but shows you the her pink AND her stink.  Can I be any cruder?  Sheeesh!  Sorry 'bout that one folks!  Hahaha  The magnificently trampy Julie Lee Wah-Yuet funkifies the cover of the May 1994 issue.  A nice, long pictorial is crammed into this volume as Julie touts her just released CAT IV flicker, TRILOGY OF LUST. 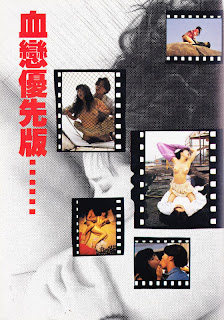 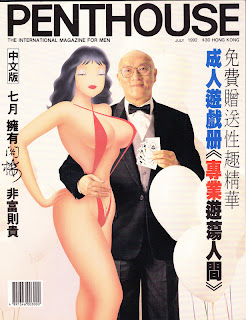 The July 1992 cover boasts Greenstreet Kan.  Kan may not be too well known among most HK movie fans but has appeared in over a dozen films and might be more well known as a HK personality.  The indispensable website, Hong Kong Cinema- View From The Brooklyn Bridge, states that, "At the age of 70, he managed to marry a woman 50 yrs his junior and kept his sex schedule busy."  Right on, good sir!  Sadly, Kan has shuffled off this mortal coil, but certainly not after shuffling his knuckles a time or two. 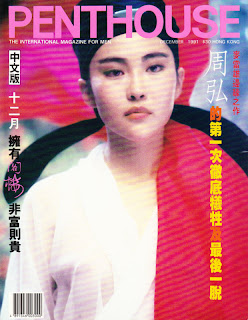 A favorite actress of mine, Ms. Isabelle Chow, who in the last post shined on a Playboy cover, sells her appearance in the CAT III classic, SEX AND ZEN with a movie still pictorial in the December 1992 issue. 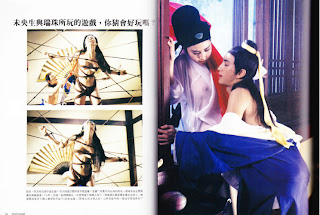 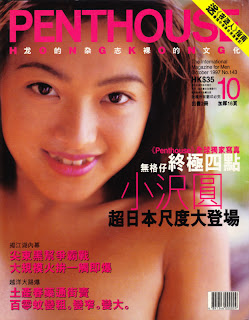 This fresh faced, crooked toothed starlet is Japanese AV actress turned CAT III actress, albeit ever so briefly, Madoka Ozawa.  Livening up the October 1997 issue as her only HK film credit, DON'T TELL MY PARTNER, was released the same month. 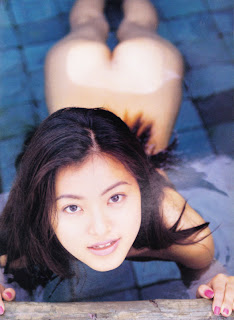 This is the only pic I can show you from her pictorial.  Yikes!  It's skin to win.  Orthodontists be damned!  Also in the issue is an interview with HK comedian/actor Dayo Wong, pictured below.  It looks like Dayo is engaged in some auto-erotica.  Maybe thinking of Madoka's mangled incisors?  Freak! 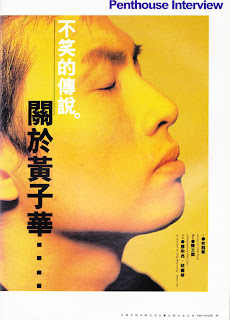 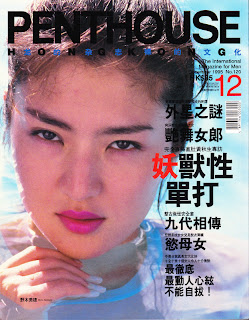 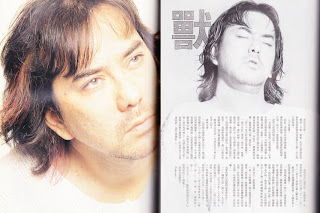 Also in this issue is an article/interview with sexy beast cop (a FB friend came up with that one.  Thanks!), Anthony Wong.  Above, Wong looks dreamy...then not so much, as he appears to be showing his 'O' face. 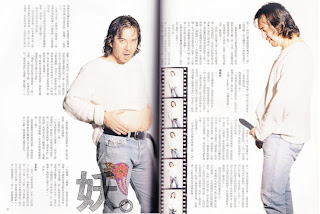 Hey, ladies!  This ain't a beer belly.  It's a fuel tank for a sex machine! 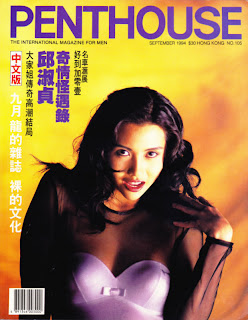 Oh, yeah!  Saving the best for last, but certainly not least.  The September 1994 issue blazes through us with the uh-maz-ing Chingmy Yau on the cover.  No nudie cutie pictorial as that is not Chingmy's bag.  It's my bag, baby.  And if I choose to fantasize about Chingmy in the buff, then that is my gosh given right.  I know you're doing the same. 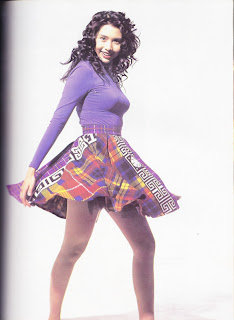