The Further CAT III Perversions Of Bullets Over Chinatown 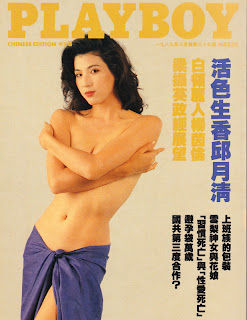 Ahhh.  More lad mags for the fans.  Freed up some money and bought another batch of HK Playboy's. You can find the other post of assorted adult entertainment papers HERE.  Sooooo, let's begin.  Above is the August 1989 print of Playboy.  The cover model is actress Mondi Yau, who was Miss Asia in 1987.  Circa 1989, Mondi had a bit role in Jackie Chan's MR. CANTON AND LADY ROSE (1989) before moving on to a mixed bag of mainstream and CAT III claptrap.  Mondi doesn't shed any clothes in her pictorial and rarely, if ever, showed any goodies on screen.  Check Mondi out in TEMPTATION SUMMARY (1990), GHOST PUNTING (1992), FRIDAY GIGOLO (1992), HER JUDGEMENT DAY (1993), I LOVE MISS FOX (1993), and THE ROMANCE OF THE VAMPIRES (1994). 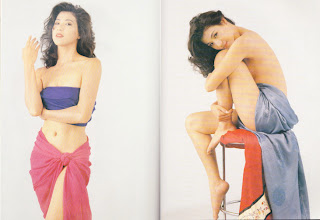 Mondi!?  How scandalous!!!!  Cover up those shoulders! 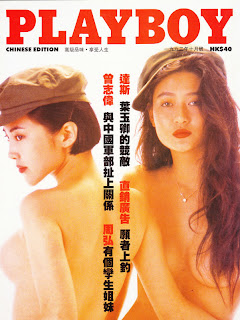 Next up is the awesome October 1992 cover touting the film THE GIRLS FROM CHINA (1992), starring the two cover girls, Isabelle Chow and the late-great Pauline Chan. While there is no steamy pictorial between the two starlets on view in this issue, there is a small article and a few screen shots of the movie.  Also in this issue is a rather lengthy interview with Eric Tsang.  In Chinese, of course.  Drats! 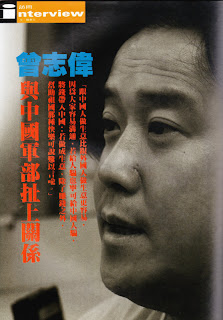 A Man Suddenly In Black 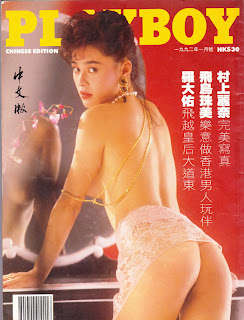 The booty of former Japanese AV star, Rena Murakami, graces the cover of the January 1992 issue.  This same image also adorns the HK movie poster for the Murakima co-starring vehicle, and one of my favorite HK movies of all time, ESCAPE FROM BROTHEL (1992).  And if Ms. Murakami doesn't tickle your pickle, there is an article on the films of Woody Allen.  That might do it for ya? 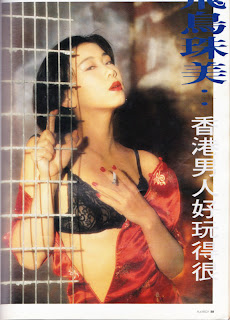 And the playmate of the Month for January '92?  Japanese model turned CAT III actress Tamami Asuka.  Tamami appeared in a few films, the CAT III one's being HIDDEN PASSION (1991), LOVE IN SAMPAN (1992) and DAUGHTER OF DARKNESS (1993).  You can check out my review and a few screenies of HIDDEN PASSION right HERE. 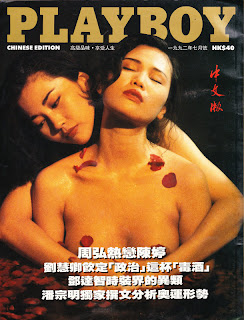 More of the former Miss Asia, Isabelle Chow, now with a little play pal, on the cover of the July 1992 issue.  Does anyone know who her partner is?  She doesn't ring any bells. 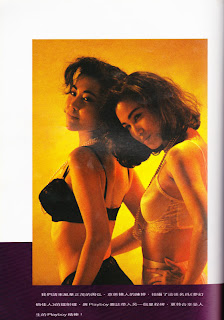 Nothing much of note in this issue aside from Isabelle and her lady friends shenanigans but there is also a laserdisc review of Sammo's MY FLYING WIFE (1991)! 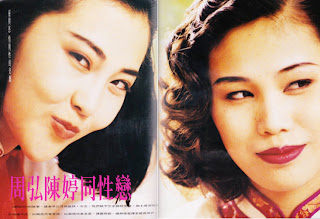 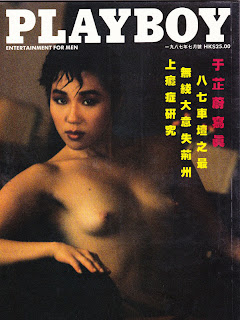 The underrated and woefully underutilized Eliza Yue surprisingly goes topless for the cover of the July 1987 issue.  Though initially making her name in CAT III productions like YU PUI TSUEN (1987), MIDNIGHT (1987), and CURSE(1988), Eliza jumped over into more mainstream films with limited success.  The early 90's CAT III craze saw her slip back into the grunge with cheap goodies like JUST LOVE (1992), ANGEL DELIGHT (1992), EVIL BLACK MAGIC (1992), LOVE NEST (1992), and MY BETTER HALF (1993).  Eliza's pictorial is darkly lit and mostly artsy fartsy but would satisfy a curious pervs need for HK cinema tartlet.  I guess?  I mean, who lets her tit fall out of her negligee while sipping tea in a restaurant?  My man rack stays snug and secure in my nightie while dining out. 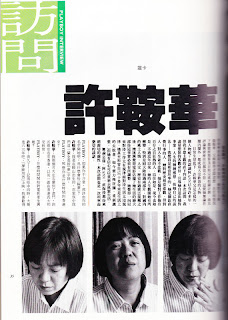 Also part of the Eliza Yue issue is an interview with one of HK's best directors, Ms. Ann Hui.  Yes.  Ann Hui is in Playboy.  Ha!  There is also a segment of '20 Questions' with Kathleen Turner, before she ate a small village. 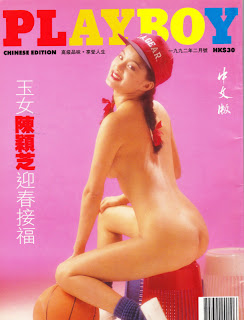 And last, but certainly not least.  My favorite issue of the bunch.  The February 1992 issue with my darling Chan Wing-Chi adorning the cover.  Look at the ass....I mean punim!  Adorable. 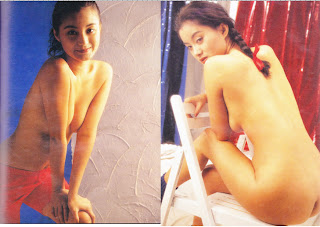 Wing-Chi has quite the pictorial spread in this issue as she is also the Playmate of the Month.  But what is so fascinating is that she doesn't really show anything!?  Is this a first for a Playmate of the Month?  Bum crack ass-ide (a-thank you), Wing-Chi goes the Austin Powers route and happily blocks all of the meat and potatoes. 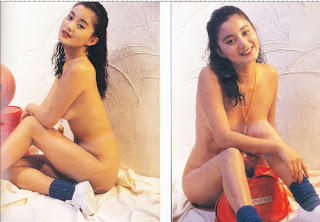 Curious, in that she has no problem going the full Monty for cinema.  At any rate, I'll take my Wing-Chi any way I can get her.  Fully clothed in a parka or burka.  Either will do just fine. 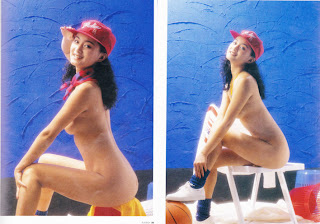 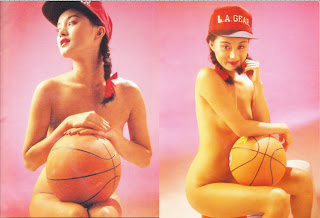 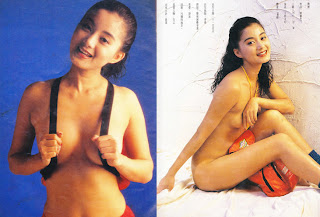 Aside from the allure of my lovely Ms. Chan, there is also a Latoya Jackson pictorial that looks to be transplanted from the US version.  I vaguely remember my best friends older brother acquiring a copy of the famed 'Latoya' Playboy and the pics look similar.  Yikes!  There is also a Bruce Lee article on hand if the Latoya layout just F's you up too much. 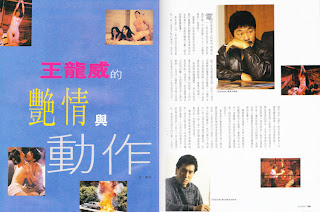 And, along for this wonderful issues ride, a write up of one of the BEST HK movies ever...... 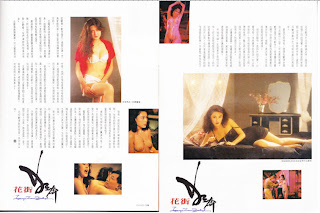 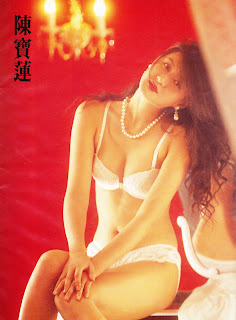 
So, another fine purchase, if I do say so myself.  And there are more mags on the way.  So, I'll end this post with the labored cliche, "I only read Playboy for the articles!"  Actually, if I could read Chinese, that just might be true.
Posted by Kingwho? at Thursday, April 18, 2013