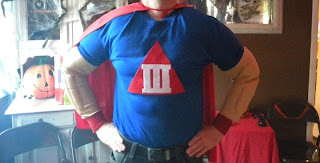 CAT III MAN, to the rescue!
-
Just a quick post here as i'm a few short hours away from heading to Laguardia. I am taking Wei to meet the grandparents in sunny West Palm Beach, FLA. Heaven's waiting room. Del Boca Vista, phase III (Seinfeld reference. Sorry.) We will be back Sunday, Halloween night. I'm hoping to get some color on my milky man boobs.
-
The above pic is from a Halloween party that Wei and I went to last weekend. She stayed true to her personality and went as Snow White. A Chinese Snow White, but Snow White none the less. And I went....well....as...CAT III MAN!!!! True to my personality as well. I had to lop off my head from the photo as I would hate for this pic to get into the wrong hands. Especially that dastardly CAT I MAN! Wei made my cool CAT III shirt because she is very artsy fartsy. We are polar opposites but somehow make it work? She doesn't care for the more 'exuberant' side of HK cinema but allows me to jump in and wallow. I try and coax her into watching a CAT III movie every now and again to which she often refuses. She has been heard to say, however, "I would prefer to watch something with a lot of nudity than a lot of gore." How can you NOT dig a girl like that? 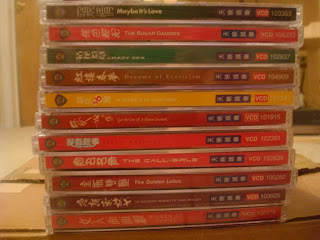 Mail call!
-
Mail call this week found an awesome Shaw Bros. package arrive at my door from a great friend of the blog, J. 11 Shaw Celestial VCD's for $50! A mere pittance for such a wonderful package. I can't wait to return from vacation and rip into a few of these. THE SUGAR DADDIES, CRAZY SEX, DREAMS OF EROTICISM, THE CALL GIRLS, and THAT'S ADULTERY, quickly move up to the top of my ever growing 'want to watch' stack of movies. Also included in this generous gift was a copy of a somewhat obscure (I have seen the laser disc on sale over @ Ebay, costing about a weeks pay) mid 90's CAT III crapper, OFFENCE STORM. This one will be first on my list when I return from Florida as I will sit and watch it while I recover from sun poisoning and rub cool aloe all over my man boobs. Thanks J for the movies! Yours will be in the mail in about a week or two. Or three. Or maybe around the holidays? You know how I roll.
-
Okey dokey. To finish out this post, below are some fun fractured subs and a quick video from one of my favorite CAT III films, Otto Chan Juk-tiu's GATES OF HELL. I will eventually post more info about the awesomeness that is GATES OF HELL, as I hope to throw a quick review of the film up here as well as post location pics from a few noticeable spots around San Francisco, where the majority of the flick was filmed.
-
All right folks! I'm off like a prom dress! Off to the Jewish promised land to spend some time with my 90 year old grandparents. It's gonna be a rager! Would it be in poor taste to watch a CAT III flick on the plane? 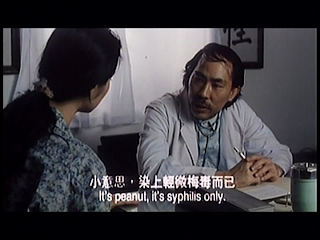 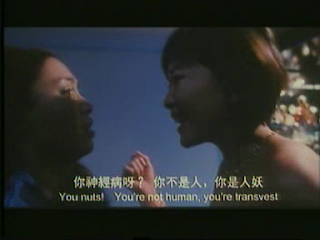 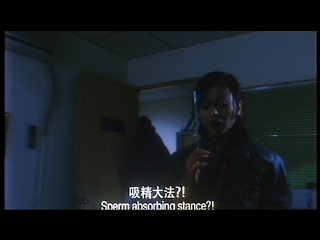