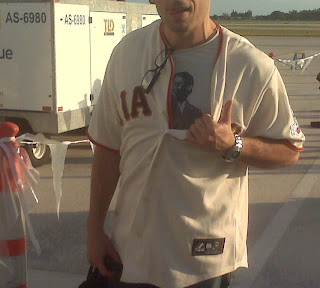 Wei and I returned from vacay on Halloween night. Going from 85 degree weather in West Palm down to the lower 40's stepping out of the Jet Blue terminal at LaGuardia. I have never wanted to return to Florida and it's octogenarian, early bird buffet population so quick! Softening the blow of the cold air AND returning home were a few packages waiting for me from Ms. Mail Lady. This most recent mail call turned my frown upside down, warmed my shriveled nether regions, and made me glad to be home. Above, is me in all my jack assery, boarding our flight from the tarmac at West Palm International. Representing for my now World Champion SF Giants (the second shitty team I root for behind my beloved shit franchise, the NY Mets) and squeezing a little HK cinema love out into the warm Floridian breeze, flashing my 'Big Brother Big' Sammo Hung Kam-bo NYAFF 2010 T-shirt. Keepin' it real, yo! 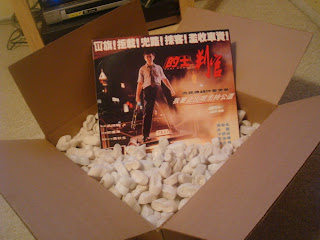 Ms. Mail Lady had a busy couple of days while I was gone. Maybe I will get her a nice X-mas card and stuff it with a sizeable tip for lugging boxes of HK movie shit to my home? Above is a World Video Supply Laser Disc of the cool ass black comedy, TAXI HUNTER, starring Anthony Wong Chau-sang and directed by the reliable Herman Yau Lai-to. 5 shekles on Ebay. It was packaged as if it were the holy grail. Not quite, but close. After opening the packaged I stripped down and showered myself in the foam peanut packaging like a CAT III nudie starlet showers herself for no particular expositional reason other than hopefully expanding and moistening the crotch region on the viewers husky sized jeans. 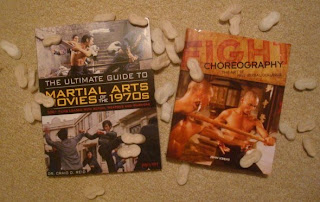 Amazon.com was calling my name last week and by excellent word of mouth I ordered the above two books. The first, THE ULTIMATE GUIDE TO MARTIAL ARTS MOVIES OF THE 1970'S, by Dr. Craig D. Reid. I am sorely, sorely lacking in my knowledge of Martial films and though I dislike reading reviews, I decided to give the book a go. Thumbing through the book I have found that Dr. Reid has an immense knowledge of Martial Arts cinema, it's ideology, forms, and weaponry. He also lets in on historical references and nicely indicates the types and context of martial arts present in the films he reviews. Also noting the actual amount of time each film displays martial arts. It's a labor of love kinda book and the vibe is lovingly picked up on by me. The second book I purchased is also a labor of love document, FIGHT CHOREOGRAPHY: THE ART OF NON-VERBAL DIALOGUE, by John Kreng. John is an actor/fight choreographer/stand up comedian, and now author of this huge book (500+ pages) of, well, as the title suggests, the art of non-verbal dialogue. Letting us in on the structure of filming fight scenes to make them appealing and seamless to our discerning movie going eyes. Kreng also shows, citing a ton of film references, HK and non HK, how films rely on non-verbal techniques to catapult a story forward through story acts and arcs. It's thankfully not technical and though an enormous book, it is light reading, easy to understand, and, so far, quite rewarding. Both are recommended. I'm probably not giving these two books their due diligence as i've just slightly perused their contents thus far, but if they seem to tickle your martial arts fancy, they are musts for your holiday lists. If you need any more info on John's book, just ask ACHILLESGIRL. She is a Kreng disciple. 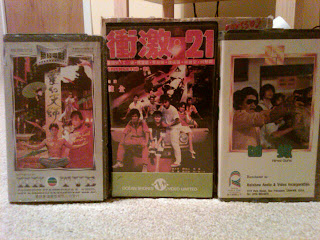 I also received a small package of 3 VHS from Ebay. A TVB program, sans subtitles, THE LAST VAMPIRE, an early Leslie Cheung Kwok-wing pic, ENERGETIC 21, and the pretty cool 1981 cop actioner, HIRED GUNS. I have seen HIRED GUNS on a Legendary Collection Joy Sales DVD before and it's a nice quick adrenalin shot of a film with a memorable scene echoing Walter Hill's THE WARRIORS, complete with a roller skating/ painted faced gang, set to a disco soundtrack. Give it a go and order it HERE. 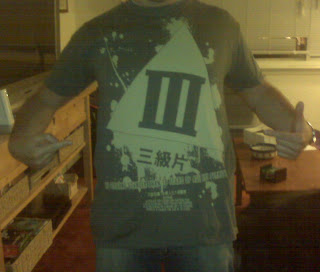 AAAAAND.....they're HERE! The CAT III T's from SHELF LIFE CLOTHING are in! Shake your booty on over and order one tout de suite! When I saw the package from Shelf life I became slightly wet. I tore into it first, threw the T on, and asked Wei to click the above pic of me. Like a little girl on X-mas morning who just got a Barbie Dream Home from Santa, I squealed in delight. SHELF LIFE'S head honcho Brian also included his 2 other new creations below. The DESTROY ALL MOBSTERS T and the wonderful HK hopping vampire/ Lam Ching-ying/ GOD OF GAMBLERS inspired, 'Gambling Vamprire', mini poster. Read the poster title again. I missed it the first time around but the title is misspelled and lovingly gives a nod to one of the many charms of HK cinema, it's fractured titles and sub-titles. If you don't own one of these great T's, you're a loser. Plain and simple. To paraphrase a surf punk stoner from 1991's POINT BREAK, "Shelf Life Clothing's the source, man. Swear to gosh." 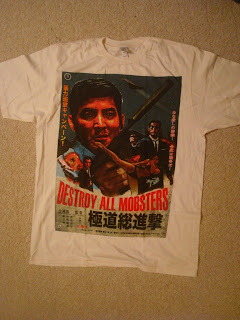 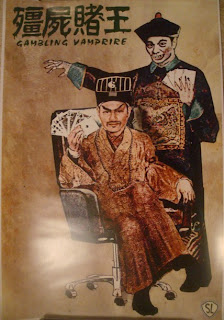 Well, I'm back in the saddle. Home, trying to scrimp my nickles together, with no vision of another vacation on the horizon. I have a Florida tan that is slowly morphing into New York wind burn. It's cold as heck out there and 'tis the season to stay inside and further indent the ass grooves on my sofa. I have a ton of HK flicks to watch to pass the time as my man juggs slowly increase in size and weight, packing on their warm winter coat of fatty tissue. Maybe I will start a supplemental blog about my moobs? But would anyone visit?
Posted by Kingwho? at Tuesday, November 02, 2010