FINALLY! My last day at the NYAFF 2010. Bruce Leung Siu-lung and GALLANTS 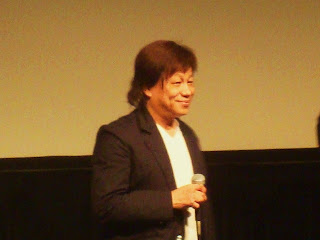 FINALLY! Posting my last day at the NYAFF 2010. This was sometime back at the beginning of July. It's been so long that I don't remember the date or many other specifics that would have made this blog post a ton better. I know that I was ass-tired from shleping back and forth from out on Long Island and into the city via the LIRR, then dragging butt in the sweaty NYC heat on up to Lincoln Center. I think by this time I started taking a taxi instead of hoofing it? I kept showing up to screenings a swamp assed mess. Even with wet naps, deodorant, and body spray in tow, the pinched nostrils from my theater mates was noticeable. Sorry ya'll. 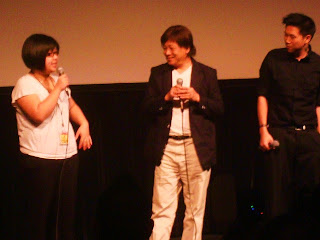 It was the North American Premiere of Clement Cheng Si-kit and Derek Kwok-chi Kin's GALLANTS. The scuttlebutt on this film was immense and it was the ONLY HK film that I was actually counting the days to see. At the screening, as you can see by the pics, were two of the films stars, Bruce Leung Siu-leung and Ou-Yang Ching aka MC Jin. Hooray! 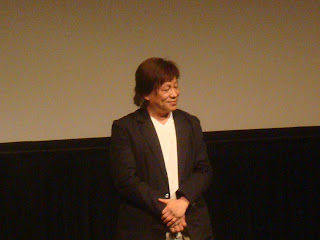 NYAFF Master of Ceremonies, Grady Hendrix, in his usual form, a man possessed, welcomed Bruce and Jin to the stage and both received a much deserved standing O and bs'ed with the audience before the screening; Bruce through and interpreter and Jin, being an ABC, in English, with a few Yo! MTV Raps mannerisms thrown in. He was a 'rapper' ya know? It was simply awesome to see Bruce, who stated that this was his first time in the U.S., be so amused with the amount of fans he had in the audience. Ever grinning ear to ear and thrilled to be there. He and Jin joined the audience in watching the film as well. 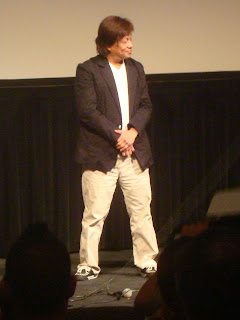 I enjoyed GALLANTS. Maybe not as much as the majority of HK cinema folk, but enough. A few other pics from 2010 were a tad more enjoyable; I'm looking at you DREAM HOME and IP MAN 2. But GALLANTS is definitely among these two as a winner for HK film in 2010. I'm not going to attempt a review because other people have done it and done it way better than I could ever do. For examples, hit up the Achillesgirl on HKCinemagic HERE and also the Achillesgirl in Action Land's blog for a different view of the film...right........HERE. GALLANTS received another standing ovation at it's conclusion. A swelling feeling of joy that HK cinema still had life. 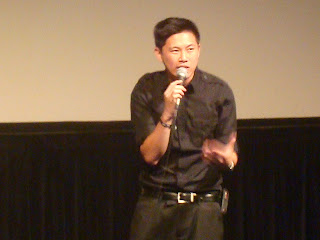 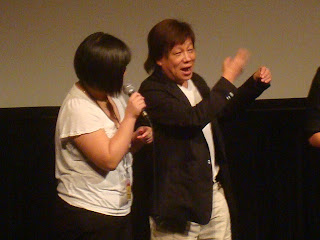 I have since watched GALLANTS a second time on DVD. This time around I was showing Wei the film on one of our 'Double Feature Friday' date nights (I think I showed her Sex & Zen after. Great date night!), and she really enjoyed it. For me, it was better the second time around, and I even became choked up as Teddy Robin Kwan exits the film. Wei did as well. 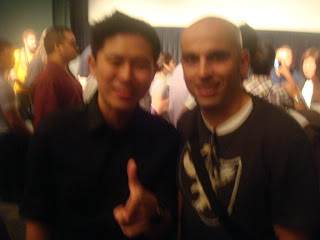 MC Jin and I. How ALL of my pics should come out. 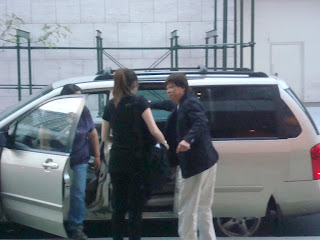 Bruce rides away in style.
-
After the film, out in front of the Walter Reade theater, Bruce and Jin took photos with the stragglers. With the subtlety of a crazed stalker, I was able to shove my camera in another moviegoers hand and ask if he can take a pic of me with Bruce. Before he could say yes, I had my arm around Bruce as if he were my lover. The pic came out rather good (I have it posted on Facebook) and maybe I will post it here someday? As Bruce was leaving, and while I was still in embarrassing stalker mode, I was able to snap a quick shot or two of his departure in a gorgeous luxury vehicle (see above photo). Nothing but the best for Bruce in NYC! If you missed my other posts covering the 2010 NYAFF, go HERE, and read about more sweaty stalkerazzi awkwardness. I have issues.
Posted by Kingwho? at Saturday, November 27, 2010

Email ThisBlogThis!Share to TwitterShare to FacebookShare to Pinterest
Labels: Nonsense, NYAFF, The Gallants