Sex and Zen 3D: Extreme Ecstasy aka Sex and Zen and a Severed Horses Head 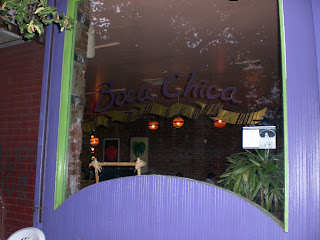 So, a week or so ago the fine folks who run the NYAFF sent out a mass email to subscribers of their newsletter inviting us lucky ones to a free Thursday night screening of SEX AND ZEN 3D: EXTREME ECSTASY.  My pants immediately dropped upon reading the email and without a thought I was planning my trek into the city.  It was my night off so it was an easy decision.  Wei had school that night and I thought she would enjoy a 'date night' in the city.  Granted, the date involved a ton of naked Asian ladies in 3D, but it was a date nonetheless.  Our first in a long while since the run up to our wedding has been a stressful mess.  At first she was undecided about the show but I sweetened the deal when I mentioned Boca Chica.  Boca Chica was a Latin American restaurant that we had gone to about 3 years ago, while on a trip into the city for my birthday to see Takashi Miike's SUKIYAKI WESTERN DJANGO.  We fell in love with the joint and had always planned to go back, never finding the time.  Wei emphatically said, "YES!"  And the date night was a go.... 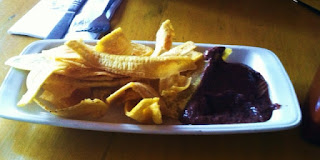 This past Thursday, after a day of house hunting and meeting with mortgage lenders telling us we couldn't even afford a refrigerator box to live in, we put the stress aside and ventured into the East Village.  Our first stop was din din at Boca Chica.  We both starved ourselves that day in anticipation.  And it was the same damn deliciousness that we remembered.   The complimentary plantain chips and re-fried bean dip were on point and we could have just eaten that all evening.  Wei ordered the Aroz Con Pollo with black beans and side salad.  Aroz Con Pollo being the only thing she knew on the menu.  It was phenomenal!  I tucked into the Cuban Sandwich.  The roast pork, ham, swiss, and toasted bread were soft and, as cliche as it sounds, melted in your mouth.  The side of fried yucca topped with garlic was unbelievable.  The garlic would last clear into the next day, brushing and mouthwash be damned. 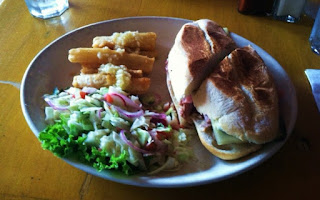 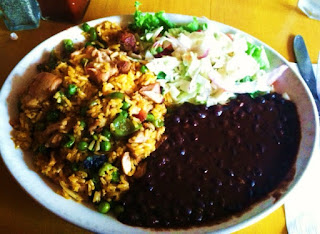 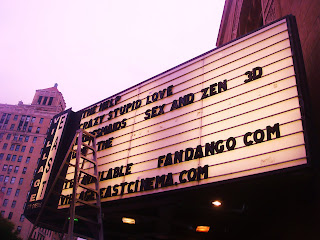 Towards the end of dinner, the skies darkened and then opened up.  A humid and typical early evening shower saw a few folks scatter on the street as umbrellas opened up and newspapers covered heads.  Finishing dinner and over stuffed, we trekked up on and over to the Village East Cinema.  This was the same theater I saw DREAM HOME at last year when it was showing at The Tribeca Film Festival.  On our quick 12 block walk the rain came and went.  Thunder stormed and purple lightning streaked the dark gray sky.  We made it to the theater very early.  A friend of mine from the blogospher/podcast-o-sphere (?) was able to score Wei and I 'special seating'.  We made contact with the event coordinator who hooked us up.  With some time left before the screening Wei and I toured the East Village for a bit.  Stepping in between rain drops and the heavily hipstered young village denizens and being wowed by the crackling thunder and flashes of lightning. 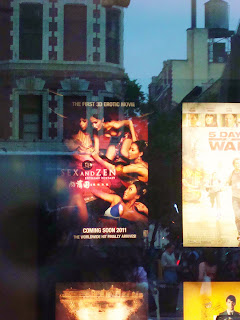 By the time we made it back to the theater the line that formed for the movie was wrapped around the building.  It was nice to see the free love showing for SEX AND ZEN 3D.  It didn't matter if they were Asian cinema fans, curious onlookers, or perverted deviants ready to drop trow and DNA in the theater.  I was happy to see a big turnout for CAT III.  We met up with another blogger; he writes for the VCinema blog,  and since we were both 'special' we got to bypass the line and get in first. 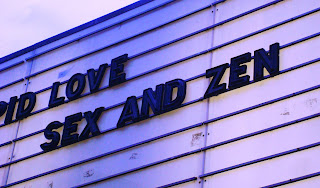 We milled around the lobby for a bit, took a few pics in front of the sole advertisement for SEX AND ZEN, and then made our way into the balcony.  Where the 'special' people section was located.  The seats where great.  Eye level with the huge screen.  A few of the NYAFF folks were seated in our section and I also noticed La Frances Hui and Jeff Yang.  La Frances Hui, the Assistant Director of Cultural Programs as well as Film Curator at the Asia Society, I knew from seeing John Woo's RED CLIFF, at the Asia Society.  She did the post screening Q&A.  Jeff Yang is an Asian American Culturalist writer who has also written a book on Hong Kong cinema, Once Upon a Time in China. 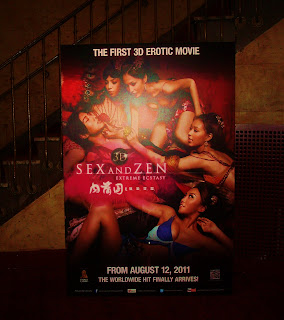 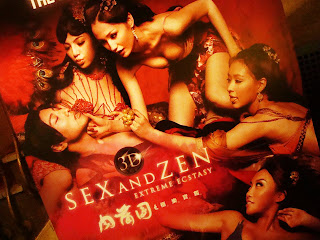 Introducing the film, for whatever reason, was a drag queen from the NYC landmark establishment, Lucky Cheng's, a drag queen cabaret, located in the East Village. You know you are in for quite a show when a drag queen gets thrown into the mix.  The screen flashed to life and the 3D glasses were put on.  I was ready for boobies! 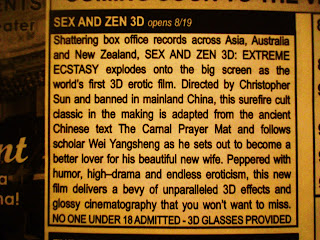 Upon all of the hype leading up to the film, I really wasn't expecting much.  I am a film goer who wants to have fun.  So, at the very least, I want to enjoy myself.  I always go into a film wanting to love it.  Why else would I spend my time on something?  To hate it?  And with SEX AND ZEN 3D, I wound up really having a ball!  Not a fan of 3D whatsoever, I enjoyed the filmmakers exploiting exploitation through the use of the 3D medium. 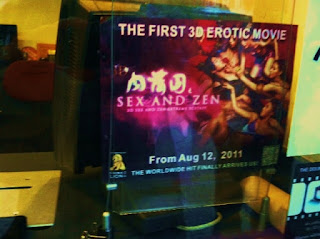 I'll forgo a review of the film as others are much better at recounting and retelling.  I will say that SEX AND ZEN 3D surprised the shit out of me.  I came away really enjoying the excess.  Now, the film is in no way great or better than the original.  The story is a bit shit, the film lasts a solid 20 minutes too long, and the narrative takes a deviant turn into needless violence in the last 1/4.  Up until then the film rolled along with silly bits of comedy and wall to wall naked flesh.  Sadism and blood stained skin was the final reels flavor and it marred the story.  Just a bit, though, as I kind of dug the filmmakers exploiting the use of 3D through violence.  And, as a follower of  HK's CAT III history, the violence seemed like a fine punctuation on top of the lightness of the first 3/4 of the film.  Recalling HK's heyday cinema that splashed on screen equal parts of dopey comedy, dirty carnal pleasure, and sexist sadism.  Everything but the kitchen sink film making.  The total package.  SEX AND ZEN 3D delivered. 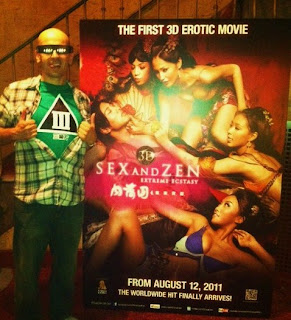 After applauding the film we dumped our 3D glasses and left the theater for home.  Wei and I tossed our best and worst film moments back and forth.  Wei gave the film an over enthusiastic thumbs way down.  She dug the original SEX AND ZEN but thought this one was appalling, citing too much nekkidnes and violence.  How can I marry this girl???!!! hahaha  I, on the other hand, well.....I think you know what I though.  An appendage WAY, WAY UP!  While not as good as the original, and I'm not really sure it was supposed to be, the film does an unbelievable job with using and abusing it's players and it's 3D technology.  Garbage story, fair film making, fun 3D, a TON of body parts for the fans, Vonnie Lui as an hermaphrodite, a nod to Kent Cheng, a horse weiner that looks nothing like a horse weiner (Take my word for it.  I've seen a few movies.), a penis slap to the face, an angry as shit Tony Ho Wah Chiu, (One of my favorite actors), and even some messy subtitles makes SEX AND ZEN 3D: EXTREME ECSTASY well worth watching.  My DVD has since been ordered and I will most definitely watch it again.  Even in 2D.   While I don't think it will signal a new wave of film making in HK cinema or even 'save' the cinema for that matter, I would most definitely welcome a sequel, prequel, or another incarnation of sex and 3D.  And, much to my delight, recently mentioned was the 3D updating of director Cash Chin Man-kei's 1999 coming of age sex film, THE FRUIT IS RIPE.  The new film being titled, THE FRUIT IS RIPE 33D.   Boobies and 3D.  A match made in my blue heaven.
Posted by Kingwho? at Sunday, August 21, 2011