C-town visit and other crap 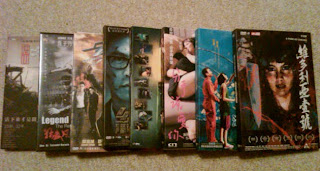 Wei and I made a quick jaunt into C-town this evening for dinner and HK movie shopping. Wei's cousin R attends NYU and lives in the city, so she met up with us, as she usually does when we are in C-town, and we all went to Big Wong's for dinner. Before meeting up with R, Wei bravely tagged along and humored me, as she always does, and assisted me in my HK movie search. 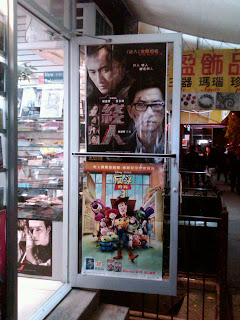 The past few times in C-town I began to slowly discover that I have been buying so much over the years that my favorite joints supply is drying up. I used to come home with 40 movies for $80. Recently, i've been taking home less and less, mostly buying new flicks, but still breaking the bank. This was the case tonight. I bought 10 or so movies, mostly all new films, and I spent over 100 bucks!? I've used and abused my favorite haunts and the HK cinema well seems to be running dry. So it goes, I suppose? 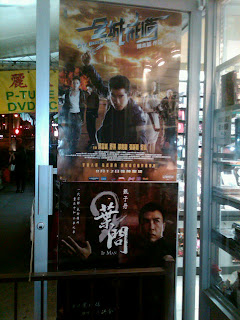 Regardless, I was quite satisfied with my haul. Among the swag were new DVD's of, AFTERSHOCK, OCEAN HEAVEN, THE LEGEND OF CHEN ZHEN, AMPHETAMINE, THE BREAK UP CLUB, CITY UNDER SIEGE (this time WITH English subs!), STOOL PIGEON, and DREAM HOME. Not bad. Not Bad. I'm re-watching DREAM HOME as I write this. If you missed my first blog entry about the dark comic brutality of DREAM HOME, click.....right.....HERE. 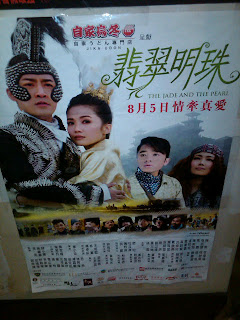 I also took a few cheesy shots of store front movie posters. Didn't have my camera with me so my Blackberry had to suffice. After shopping, met up with R, headed over to Big Wong's on Mott St., and had the usual, Roast Pork and Roast Duck over rice with a fried egg, Chinese broccoli, and ginger-scallion sauce on the side. My man boobs are kept luscious because of this delicious din-din. 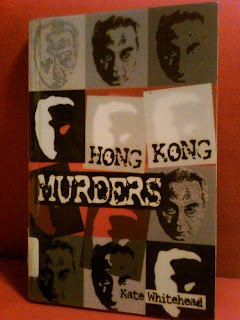 I also had a nice mail call today. FINALLY picked up this book from Amazon after a few years of eyeballing it. HONG KONG MURDERS (a used copy from the Cleveland Public Library. Cleveland does indeed rock.) by Kate Whitehead runs (I hope in depth?) through the history of the fragrant harbors baddies including the stories of HK's only two serial killers, Lam Kor-wan aka 'Dr. Lamb', and Lam Kwok-wai aka 'The Tuen Muen Rapist'. Lam Kor-wan was immortalized, of course, in DR. LAMB, portayed by some guy who's name escapes me at the moment. Ahem. The story of Lam Kwok-wai was also set to film in the 1994 Cha Chuen-yee true life thriller THE RAPIST. To read an old-ass review I wrote of Chuen-yee's exceptional thriller, go HERE. Also included in the book is the tale of Cheung Chi Keung aka 'Big Spender,' as portrayed by Ray Lui Leung-wai in, well, BIG SPENDER, and also played by that damn actor who's name is escaping me now?! It's driving me nuts! Anyway, that movie is called OPERATION BILLIONAIRES. Wan Kuok-koi aka Broken Tooth Koi is also chronicled. That gosh darn actor who's name I can't think of and it's beginning to really piss me off now......well, he also headlines the supposed true to life story of Broken Tooth Koi in the film CASINO. Ten or so other sensational, ripped-from-the-headlines yarns about the seedier side of HK fill out the book and I am itching to rip into the pages.

-
And finally, a little shout to all of my Bay Area friends. My buddy Coffin Jon over at the yakuza cool Vcinema is teaming up with The Red Lantern for a West Coast premiere/San Francisco screening of the Ninja flick KAMUI GAIDEN! Check out the pic below or go HERE for more details. 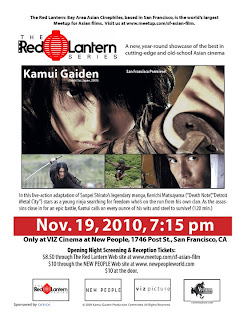 If there are any naked lady ninjas in the film, let me know. Have fun!
Posted by Kingwho? at Thursday, November 11, 2010