Ms. Mail Lady struck again. She may have thrown out her back with this big box o' rocks? My dealer lovingly packaged my load of HK VHS with what appears to be an entire Urban Tulsa Weekly. Cheers from the Lone Star State! Though I had most of the movies in this tow, I just couldn't pass up these VHS as they are, of course, OOP, and the tiles so dang sexy! They were individually wrapped and more resembled bricks of coke! Similar buzz.

"Hi. How are you? My name is Elliot, and I'm with the Cub Scouts of America. We're selling uncut cocaine to get to the jamboree."

15 golden era VHS for a cool hundy! Shipping included. Though I should really be saving for my upcoming wedding AND a place to live, it's a deal I just couldn't pass up! So, in a few months, you might find me living out of a storage facility. It would be worth it. 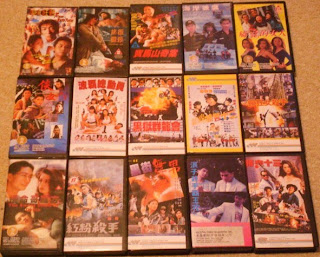 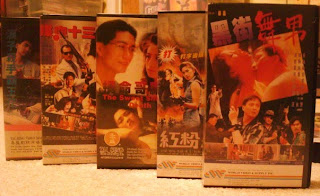 So, here we go. From left to right: ROVER KILLER AND MADAM aka KILLER FLOWER(1992), BLOODY REVENGE aka SPY BLOOD THIRTEEN aka SPY THIRTEEN(1992), THE SWEET SMELL OF DEATH(1994), PINK PANTHER aka PINK KILLER aka ROGUE KILLER(1993), DARK STREET GIGOLO aka A DANCING BOY IN UNDERWORLD STREET aka BLACK STREET(1993). I actually found 2 World Video dvd's of PINK KILLER on the cobwebbed bottom shelf in the back of an old Chinatown shop in San Francisco on my last trip there. I also reviewed A DANCING BOY IN UNDERWORLD STREET few months back. THE SWEET SMELL OF DEATH is another cool rarity that I first saw last year. A cool genre mixer of thriller and comedy as only HK can pull off. 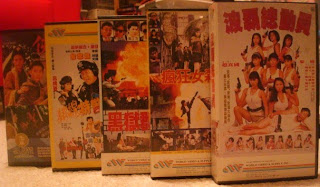 ZEN OF SWORD(1992), NAUGHTY CADETS ON PATROL(1987), HEROES IN GAIL aka GANGS POWER(1992), LADY KILLER (1992), and LADIES IN OPERATIONS(1993). I had seen ZEN OF SWORD well over a dozen years ago as I first purchased it as a bootleg VHS. I also recently found a copies of HEROES IN GAIL and LADY KILLER (this is the Taiwanese film with Alexander Lo Rei not the similarly titled cut and paste film from the same year) by 'other' means. So stoked to get my hands on a legit copy. Well, as legit a World Video VHS can be?! NAUGHTY CADETS ON PATROL is a film that I have never seen available in any format so for $4 and change, I think I won a prize? Also, LADIES IN OPERATIONS I have never seen in any format. That one goes directly on top of the 'must watch' pile. 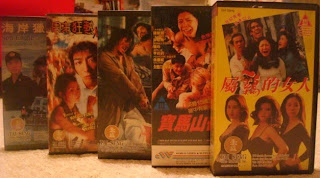 And finally, SEA EAGLE(1995), RAVE FEVER aka X-MAS RAVE FEVER(1999), HUNTING LIST aka KILL EXTREMELY(1994), SUBURB MURDER(1992), and GIRL GANG aka SEXY PLAYGIRLS(1993). I was able to find SEA EAGLE before in a previous Ms. Mail Lady package, but for a few bucks, why not have an extra copy on hand? I have the VCD for HUNTING LIST as well as an old bootleg VHS where I originally saw the film. Great, great TRUE ROMANCE knock-off from Chu Yen-ping. Really excited to get SUBURB MURDER and GIRL GANG on VHS as I have them in VCD format as well as the DVD for GIRL GANG. Nasty CAT III fun those last two! Looking forward to revisiting them in loving VHS format.