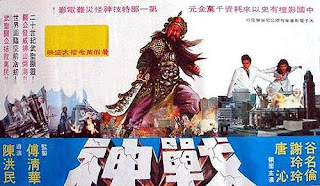 It has been unearthed!!! The much spat about but seldom seen colossal Taiwanese kaiju classic......WAR GOD!!!!! With much thanks to Sleazy K from So Good Reviews and...well... Sleazy K's Video, for tracking this bad boy down and lovingly sharing it with a select few (I was lucky enough to be one of the few) before unleashing it on the public in all of it's downloadable torrent glory. I will not venture a review for this splendid spectacle as we all have been waiting for our good sister, Achilles Girl In Action Land, to plunk down her calamitous write up on this event film. And like the swift falling of the mighty God Kwan's staff, Achillesgirl has crowned us with a doozy of a review. Check it out HERE!!!!!!

To whet your Taiwanese kaiju appetite, above is a brief clip of our beloved God Kwan defending us from those evil big rubber headed aliens! TAKE THAT!!!!! You rubber domed alien person thingies!!!!

Switching gears from the enormity of God Kwan, Ms. Mail Lady made another delivery today. My good buddy from the blogosphere, Glenn, over at A Pessimist Is Never Disappointed, is selling off a bunch of his beloved Shaw Brothers films. WTF?, you ask? Fear not. It's all for a good cause. Glenn is planning on uprooting from this shit deal that we here in the states call the 'American Dream', and planning on planting himself squarely and soulfully into our beloved former colony, Hong Kong. To finance his journey to the far east (or west), he is lightening his load for the transplant. Glenn is one of the most generous people I have met through social networking and a genuine good guy. If you are interested in purchasing any of his Shaw Bros. DVD's or VCD's, check out the remaining members on sale right HERE! 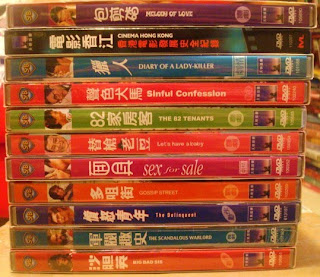 Alrighty. So, my big box of win has yielded a ton, well, 27 Celestial Shaw Bros. classics. Check out the pics for the titles. A lot of goodies to wade through. Something about the colorful Celestial packaging really gets me going. I must admit....I opened this package a few hours ago and I'm still kinda moist! 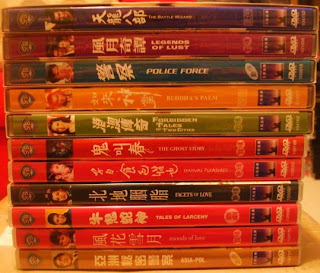 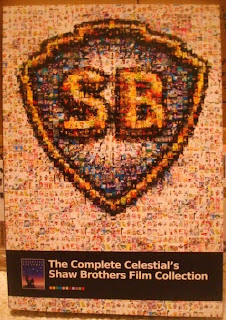 One of Glenn's coolest gifts (and he just threw it in for me. I told you he was a good guy!!!) and as he jokingly describes it, " You have the fruits of my labors in hauling ass to the Celestial office," a dang wonderful Celestial Shaw Bros. Film Catalog. Below is a pic from the 'Erotic' section (what else?) of the catalog. If you really dig Shaw Bros. or are just a collector of HK films, hook Glenn up with some of your hard earned coin. I really want to see this great guy in HK! I need a futon to sleep on when i'm in situ!!!! 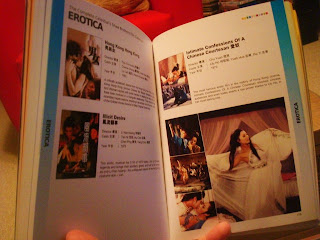