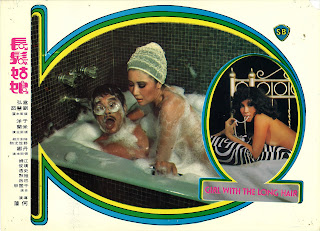 GIRL WITH THE LONG HAIR (1975)
-
A few more great Shaw Bros. lobby cards from my brutha from another mother, KW, who also sent along a few more NSFW images that I posted back in March.  Check those dirty images out HERE.  Above and below are from Ho Fan; he of the Vaseline lensed camera.  Though Ho Fan is more generally known as an artsy fartsy erotica maker, he could also be wonderfully playful, as he proved in 1975's, GIRL WITH THE LONG HAIR, starring Shaw Bros. sexpot, Dana.  Check out Sleazy K's review of the film HERE.  I believe it was one of the top films he watched in 2010!?  Unfamiliar with Ho Fan?  Sleazy K and I discussed him a bit in our Sex and Zen episode of our This Week In Sleaze Podcast.  If you haven't, check that out as well. 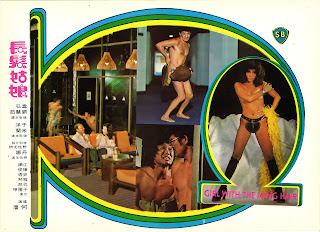 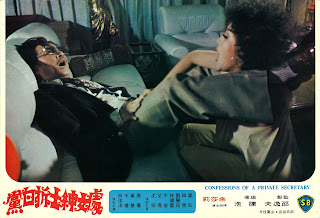 CONFESSIONS OF A PRIVATE SECRETARY (1977)
-
I have never seen CONFESSIONS OF A PRIVATE SECRETARY or heard of it for that matter.  Discovering that the film stars the oft nekkid Shirley Yu Sha-li puts this one on my radar.  I may have mentioned this before but doesn't Shirly Yu Sha-li look like Siu Yam-yam?  That's a lovely Shaw Sis sandwich I wouldn't mind being a part of. 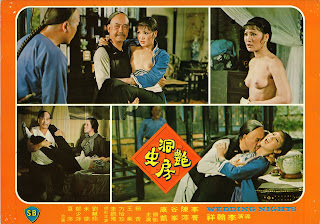 WEDDING NIGHTS (1976)
-
WEDDING NIGHTS is another Shaw film that I am entirely unfamiliar with and until KW sent along this cool pic, didn't know existed.  The film stars quite possibly my favorite Shaw Bros. actress, Chen Ping, whom throughout her career was never afraid to go 'there'.  And there is wherever your little mind could imagine.  She was a gamer.  And by gawking at the upper portion of this lobby card, ya'll know what I mean..... 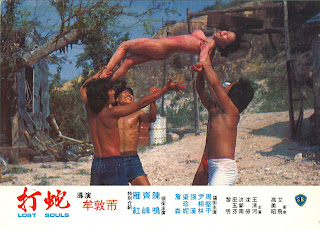 LOST SOULS (1980)
-
Another vicious lobby card from the 1980 Mau Dui-fai (T.F. Mous) roughie, LOST SOULS.  About 2 years ago, a Facebook buddy of mine actually befriended Dui-fai for a spell and was able to sit down with him and complete a very cool documentary on his career.  Unable to release the film as he wanted, my virtual buddy released the film on Youtube.  Check out part one below and then do yourself a HUGE favor by hitting up the rest of the film.  Amazing stuff and a damn fine job! 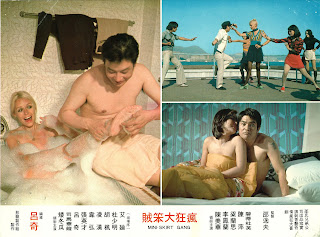 MINI SKIRT GANG (1974)
-
And bringing up the lovely rear is a film full of females with lovely rears, MINI SKIRT GANG.  MINI SKIRT GANG had only been available in an unsubtitled version for the English speaking masses but has since been fan-subbed and uploaded around the interwebs.  And gosh love the fella who did so.  The film beautifully boasts the aforementioned gamer, Chen Ping and Scandinavian charmer, Birte Tove.  It's irreverent fun finely mixing dopey comedy and T&A.  Look for it and love it.
Posted by Kingwho? at Wednesday, July 27, 2011