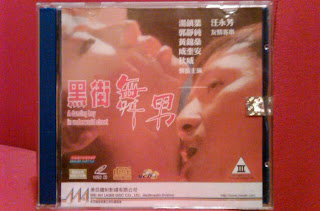 A DANCING BOY IN UNDERWORLD STREET

This wonderfully titled genre exercise from 1993 is an excellent mix of action and nudie sleaze. The euphemism of a title I assume refers to a gigolo? As in one of it's alt. titles, DARK STREET GIGOLO? Whatever it refers to, B-movie icons Dick Wei, Melvin Wong Gam-san, Ken Tong Jan-yip, and a scene stealing, scenery chewing, larger than the almighty gosh himself, Shing Fui-on get to macho posture and act like big cocks of the walk in a neatly paced and packaged cheapo. 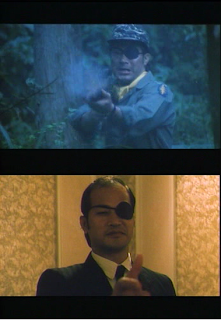 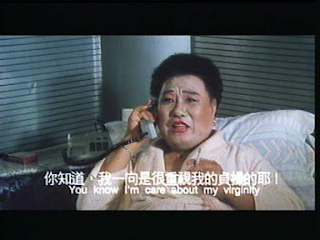 I bought the vcd used off of Ebay many a moon ago and watched it soon after. While I do recall mildly enjoying it the first time around, I remembered very, very little of it. I recently gave it another go and was so dang happy that I did. Z-grade crap made in this films vein were a dime a dozen in the early 90's and I have seen many a weak suck from that era. A DANCING BOY IN UNDERWORLD STREET is a touch rare and most definitely worthy of a look. 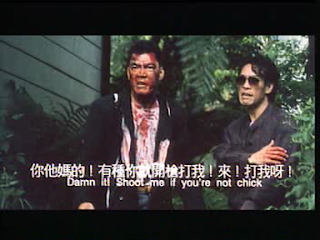 The story is shoddy (as were 95% of HK films from those years) but that is definitely not a knock. Shitty mumbo jumbo about arms smuggling that has a double cross here and there but nothing that'll F your mind. It's simple narrative leaves many openings for some finely staged meager budgeted action scenes. Explosions and spent artillery are everywhere as the magic bullets fly and the victims twirl, flip, and flop before hitting the dirt. There is also a fine smattering of nookie scenes involving people of little consequence to the main action. Most of these scenes are rather limp going and turtle paced. But hey, they are bang scenes with nekkid people simulating freakin' on film so it can't be all that bad. A word of warning to those who didn't grow up in the 70's and 80's. The ladies sport au naturale undercarriages. 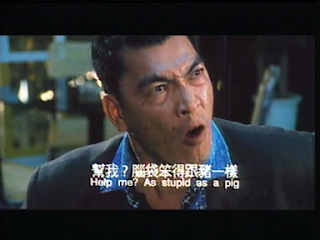 Oh, Big Silly Head. Who doesn't just love Big Silly Head? The late Shing Fui-on goes off in this piece and overacts so damn wildly. Barking, grunting, and grouching at everyone and everything. He is most definitely the coolest thing about the film. He'a low level dai lo and when his small potatoes address him as such, the subtitles read, "Big Cheese." The spoiler that i'm kinda gonna warn you 'bout right here is that Fui-on bites it half way through the flick. But turn that frown upside down. We still get Dick Wei with an eye patch, Melvin Wong Gam-san's mustache, and Ken Tong Jan-yip's apartment adorned with a Terminator 2, Rambo, and Gerardo poster. Rico Freakin' Suave! 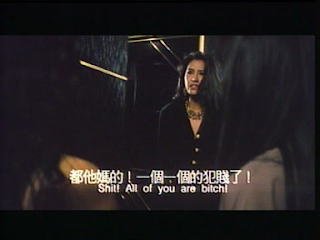 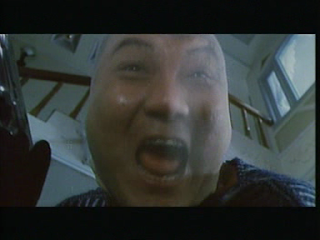 The above image, of a pantyhose domed thug, is part of a very effective home invasion scene that is quite brutal. The lady of the house, a working girl, knows waaaaaay too much for one gang to handle. So, a L'eggs headed henchman is enlisted to take her out. And take her out he does but not before smacking her around for the camera. It's a wild scene that is sure to elicit an, "Oh, shit!" What was that song by Prodigy? Smack My Bitch Up? They must have seen this film? 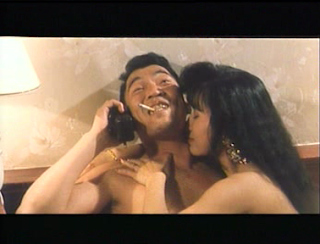 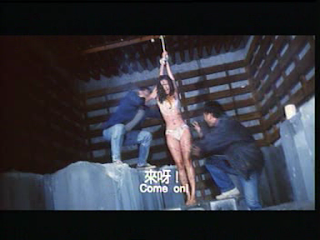 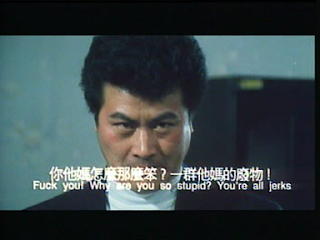 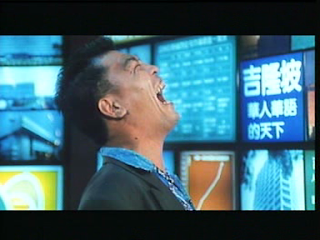 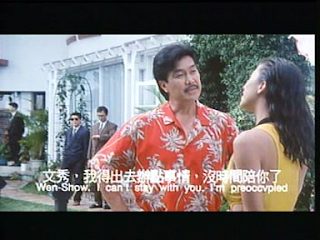 Pointing to the cheapness, or maybe realism, of this piece is a Hawaiian shirt worn by Melvin Wong gam-san. This ugly wardrobe choice makes an appearance at the beginning of the film. As the film spans a week or two, nearing the films finale, Melvin sports the same shirt. I will tend to think of this as film realism and not a wardrobe budget constraint. Hey, even dai lo have a clothes rotation. Maybe since he wore the shirt last Monday, being a new week, enough time had past where he thought he could wear it again? 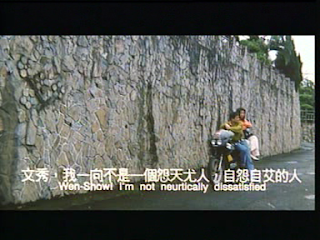 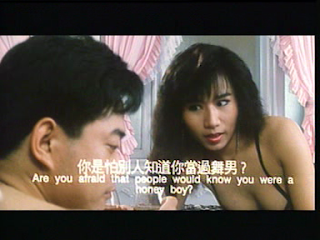 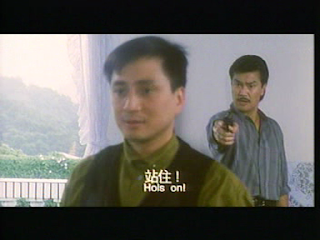 You might really have to be an all encompassing HK film fan, and maybe even a very forgiving one as well to enjoy A DANCING BOY IN UNDERWORLD STREET. This is lightweight genre stuff but I found it to quickly be in my wheelhouse. The familiar faces and quick bursts of action and naked bits really fill any narrative voids and push the film forward at a nice clip. For a film who's running time is a shade under 90 minutes, there are about 5 really nice action scenes and maybe 3-4 boot knocker episodes. That amounts to a steady flow of blood and sperm. And isn't blood and sperm what it's all about? 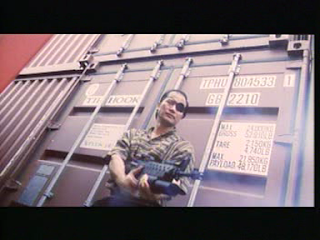 Sometimes a Dick is just a Dick
- 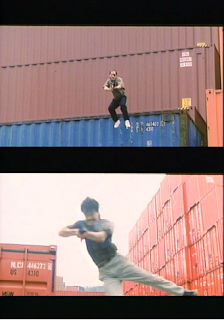