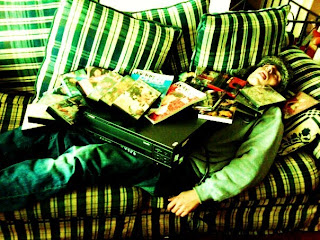 Okey dokes. It's time for me to totally act like a little brat and show ya'll what Santa and Wei brought me for X-mas. It's been a tradition for the past few years to take a pic, like the one above, with ALL of my X-mas goodies covering me. I'm not quite sure how it started but, like the late Shing Fui-on, I'm a 'Big Silly Head', and probably thought taking pics like this would be funny. Please, indulge me in this nonsense. I'm surely not bragging about the gifts I receive. I'm just being a silly goose and making an ass of myself for your viewing pleasure.
-
I have been very fortunate (and grateful in return. I think?) to Wei, her family, and my family for indulging my hobby for years and years and years. They really come through for me time and again and the holidays are no different. I am VERY fortunate. This Christmas was a tad lean with the gifts, in comparison to previous years, but it was a great case of quality over quantity. The above pic was taken post gift unwrapping on X-mas morning. The one below was taken last year. And the one below it was taken the year before that. The two previous years I was overwhelmed with HK flicks, hovering around the 100 HK movies mark. This year, however, the film stack dwindled to around 30 or so. Now, I wasn't complaining one bit. Santa Wei had bigger and better things for me to unwrap. 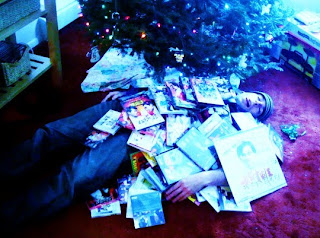 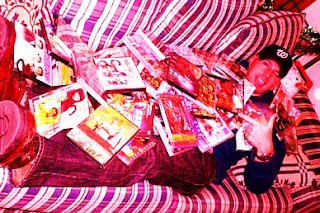 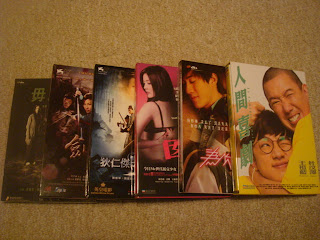 Above are some of the newer flicks I received on Christmas. And I have already run through almost ALL of them. Tsui Hark's DETECTIVE DEE AND THE MYSTERY OF THE PHANTOM FLAME, Derek Kwok's FROZEN, Kenneth Bi's GIRL$, Chan Hing-kar's LA COMEDIE HUMAINE, Albert Mak's FORGET ME NOT, and Su Chao-pin's (w/ an assist by John Woo) REIGN OF ASSASSINS.

For a little more on LA COMEDIE HUMAINE, allow me to plug a friends new blog. Click HERE to visit the cool blog, A Hero Never Dies, and read his review of the film. We are of the same opinion. Skip it. 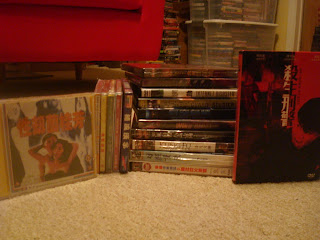 More flicks. Some DVD's and a handful of VCD's. The diamonds in the rough out of this batch were an interesting low-budget find on DVD, HE-BORN TO KILL. The other was a little talked about CAT III title, LAN KWAI FONG SWINGERS, I got on VCD. HE-BORN TO KILL is a Taiwanese action cheapie from 1993 starring Alex Man Chi-leung, Jack Kao Kuo-shun, and late HK CAT III starlet, Pauline Chan Bo-lin, in a small role. I gave it a go last week and it's kind of a snoozer. There is a touch of style in the film but the substance is sorely lacking. In a really off the wall moment, gangster Jack Kao Kuo-shun vows to run his burgeoning gang like Middle Eastern dictators, as the room he is in is adorned with posters of Ayatollah Khomeini, Muammar al-gaddafi, and Saddam Hussein. WTF? 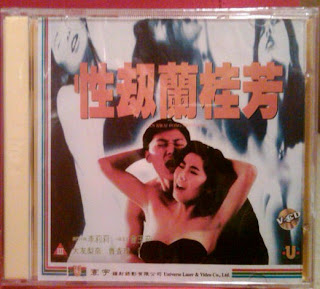 As for LAN KWAI FONG SWINGERS, I have seen this CAT III oddity on a really crappy copy that is floating around on the web. This film is 'partly' based on a true incident that occurred in the Lan Kwai Fong area of HK on New Year's day, 1993. The following passage is taken from the all knowing Wikipedia:

"On 1 January 1993, 21 people were killed and 48 injured in a large-scale human stampede whilst celebrating the New Year's Day in Lan Kwai Fong. The location's narrow streets and a sloped gradient, poor police planning and bad weather all contributed to this disaster.

More than 15,000 people were crammed into the area for the New Year countdown at the time. The Hong Kong government appointed then-Court of First Instance judge Kemal Bokhary to conduct an inquest into the disaster. The stringent crowd control measures now in force at major holiday events are a direct consequence of the inquest's recommendations."

Now, you may ask, how does this event tie into the naughty cover art on the vcd? It doesn't. LAN KWAI FONG SWINGERS is a front to back screw fest that becomes truly and absurdly tasteless in its finale, trying to capitalize on a horrific event. I'm a most forgiving HK movie fan but this films finale f'ed my mind. I hope to do a review in the future. This is must see CAT III junk. Below is but a small taste of LKF SWINGERS. It's just that kind of film. 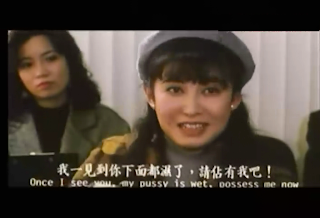 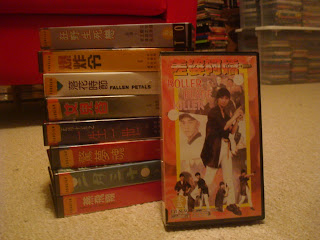 On to the VHS. Only a few this year with the winners being Taiwanese cheapie ROLLER BLADE KILLER, Edward Tang Ging-sang's 1995 actioner RED ZONE, and an exceptional gritty drama, also from 1995, Tony Au Ting-ping's TOUCH OF EVIL. The latter 2 replace old VHS copies of copies I have and I am really looking forward to revisiting them. Here's a 10 or so year old review of TOUCH OF EVIL that I wrote for cityonfire.com. 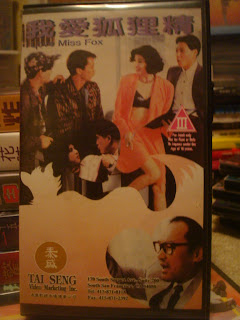 Ahhhh. Another VHS winner and a shining jewel in my CAT III collection. Earlier last year, my friend K, from the great HK movie review site, SOGOODREVIEWS.COM, turned me on to a bunch of hard to find CAT III films. He copied a few of them for me and one of the brighter spots in the discs he sent was the film shown above. I LOVE MISS FOX. A totally fun nudie romp with a ton of grab ass going on. I mentioned a bit about the film back in August. Go HERE to read more about naked shenanigans. 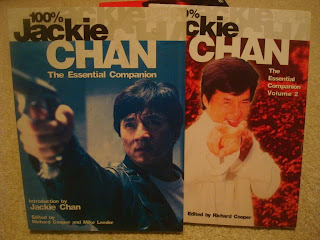 I was also able to find these old Jackie Chan books in the bargain bin of a second hand bookstore. So, that would make these books the lowest of the low. They were already second hand and marked down considerably. I suppose the next stop before giving them away was a lowly bargain bin. I rescued them from a vagrants oil-drum fire fate and decided to wrap them as gifts to myself. I have issues. 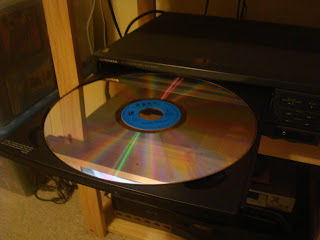 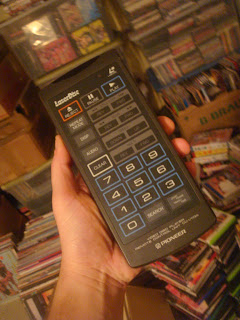 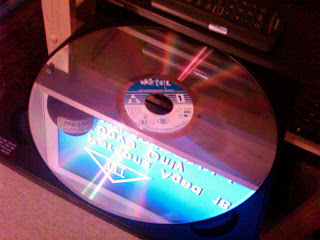 Santa Wei also hooked me up with a new All-region DVD player that is currently on overdrive. Well, it's almost an all-region player. It works beautifully for every region but, peculiarly, region 1 discs? Is it me? I'm not complaining. My other DVD player is still in fine condition. It's just a minor matter of clutter as more space gets taken over in my entertainment center as well as the ever growing tangle of wires now connected to my TV.

Did I mention that I am a very fortunate person? I hope ALL of my friends/readers had a wonderful Christmas. What did you guys receive? Any HK goodies you want to share?

Also please note, I'm not such a self indulgent bastard. Really, I'm not. I would gladly trade my gifts to end famine or attain world peace. Well, maybe not my laser disc player?