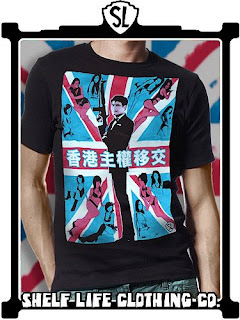 First things first. A little plug for my buddy at Shelf Life Clothing. His new creation is ready for shipping. I just got mine this weekend and it feels so great up against my luscious man breasts. I'm sure it will cup and snuggle your man juggs as well. Please hit up Shelf Life Clothing and gear up for the upcoming 14th anniversary of the Hong Kong handover this coming July with the aptly named Handover Tee. I now own a Shelf Life shirt for every day of the week! Be cool like me, yo! Word up! 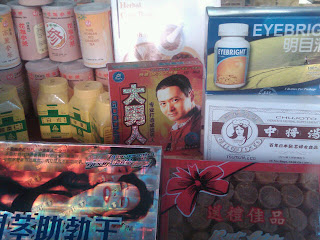 Last weekend we celebrated Wei's birthday by heading into Flushing for dim sum with her family. Wei is now finely into her 30's and if I don't marry her soon will be classified as a spinster. It was cold as heck out but we persevered against the wind towards Ocean Jewel Seafood Restaurant, a great dim sum spot that we frequent in Flushing's C-town. The wind whipped our faces as we wiped the flowing snot away from our upper lips. It was a rough one. On the way, we came across the above store window, where I noticed a picture of Chow Yun-fat, hawking something or other? I asked Wei what product Yun-fat was drumming and she had no clue. She doesn't read Chinese well. Bad girl! So, she asked her father. Oh my lord. We continued to walk toward dim sum as Wei's father struggled to explain to her in Chinese, and I could tell by his stutter and 'jerky' hand gestures that this was gonna be great! Wei turned to me to relay her dad's message but I already knew what he was talking about. And I grinned like a Cheshire cat. And I giggled like a school girl. And I'm still giggling as I write this. Wei and her dad had a nice discussion about Chow Yun-fat and erectile dysfunction. 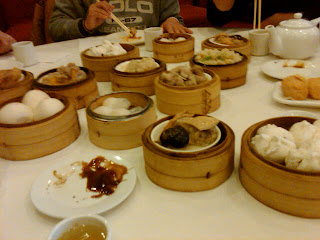 The following pics are of my man boobylicious dim sum adventure. There were six of us but we ate as if there were 12. We usually get to the restaurant a bit late, though before the noon throng of really late late-comers, and as such, get shuttled into one of the back rooms. I always quickly note to Wei that the hostess sees the white boy in the entourage and make us sit waaaay in the back. I'm a bit of a shit. 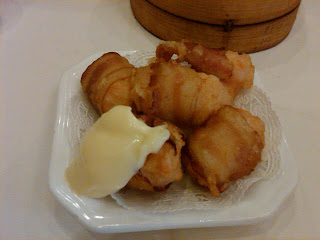 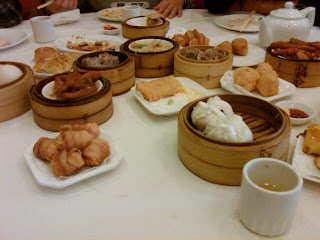 Feast fit for a Kingwho? 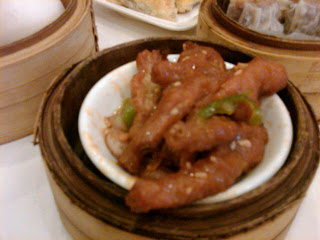 Chicken feet or.....Phoenix Claws. Because that sounds so much cooler. 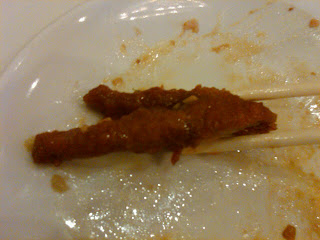 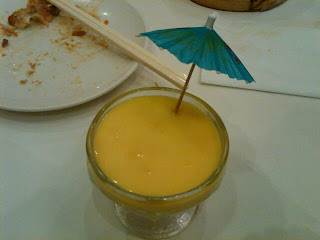 Mango Pudding. I added the parasol to be kitschy. 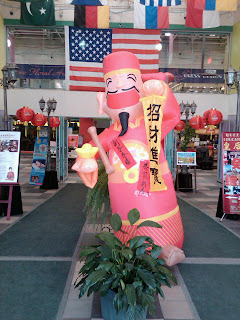 After dim sum Wei, her mother, and I headed into the Flushing Mall to talk business. There is a wedding center inside the mall and that was the main destination. The secondary one (main in my book) was to the dvd joint. As Wei and her mother putzed around the wedding center I quickly made a dash to the dvd joint. Slim pickin's this week so I only picked up one movie. A few pics below, my sole spoil, Goretti Mak Yan-yan and Clement Cheng Si-kit's MERRY GO ROUND. I returned to the wedding center where Wei and her mother were deep into negotiations with one of the wedding joint ladies. I sat down and listened to the Mandarin flow back and forth and just shook my head when needed. I didn't know what the heck was going on? This process should be fun!? 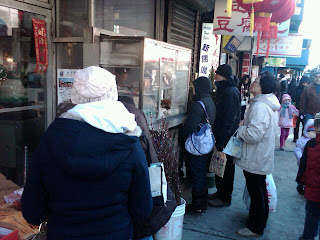 After the mall, it was back out into the biting cold of the mean streets of Flushing. We made a few stops before departure. Above, standing on line waiting to pick up fish balls. This place, on Roosevelt Ave., west of Main St., doubles as a florist. The fish balls besting the floral arrangements. 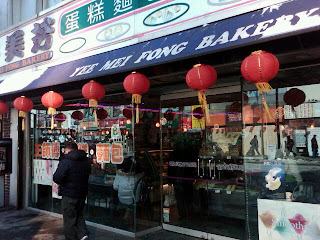 Wedding shenanigans fresh on Wei's mothers mind, we stopped at this bakery to inquire about a wedding cake. Also picked up some bubble tea for the ride home and to top off my jiggly man rack. 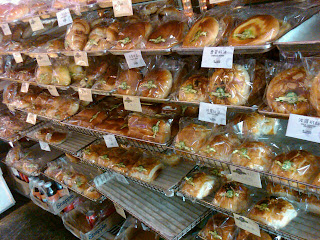 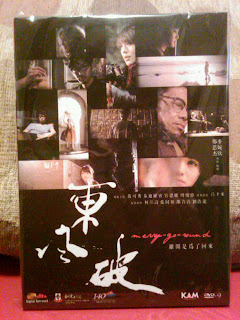 Merry Go Round
-
I haven't put up a video clip in a while so here ya go. The cool finale of the 1993 Girl-gang actioner, PINK PANTHER aka PINK KILLER. I found this dvd (actually 2 of them) in the back of an old San Francisco Chinatown shop. I bought both for a buck each. A great find. Enjoy the anti-misogynistic mayhem as girls rule and triad punks drool. Buy PINK KILLER here.
Posted by Kingwho? at Monday, January 31, 2011