Podcast On Fire + This Week In Sleaze = Commentary On Fire: RED TO KILL DVD COMMENTARY! 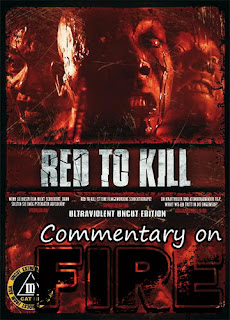 RED TO KILL (1994)
-
Is there a dirtier film in HK cinema that RED TO KILL?  Well, there might be something more sleazier out there starring Charlie Cho Cha-lee or Stuart Ong, but nothing matches the warped sensibilities of this Billy Tang Sing-hin's brutal rape-revenger from 1994. So, with that in mind, a DVD commentary was born.  RED TO KILL, though tough to look at, is very accessible and ripe for a cursory once over.  Joining Sleazy K and I is the Podcast On Fire Network's master squawker, Stoo, a newbie to films of this ilk.  Stoo was a RED TO KILL virgin as we started recording and afterwards made a beeline for the showers, hacking at his dirty pubes like Lily Chung Suk-wai and muttering to himself, "Dirty.  My parts are dirty.  Dirty.  Dirty.  Dirty."

As for me, this audio commentary was a first.  I am not one to listen to audio commentaries on special edition discs because, frankly speaking, I don't give a damn.  STOP TALKING OVER THE MOVIE YOU SELF IMPORTANT TURD!!!  Well, that is how I generally feel, and I went into the commentary with reservations.  Especially while choosing such a visually visceral film as RED TO KILL.  I didn't want to ruin the film while yakking over it.  To me it was the equivalent of an asshole in a movie theater whisper-shouting his commentary on every scene.  I want to punch that douche in the face and now, I was that douche!  But, I soldiered on and gave it a go and, for the most part, personally speaking, it went pretty well.  The commentary itself is solid.  But, more than once you can find me mumbling and bumbling like a fool as I was caught just watching the film (for the umpteenth time) and not giving the majority of my attention to the commentary banter.  It was a good time regardless and I would definitely be up for another one.

You can listen to the commentary HERE, or if you are more adventurous, you can download the film + commentary HERE (It's an avi. file via Megaupload).  If you dig commentaries, check out the other babblers in the Podcast On Fire Networks audio commentary section HERE.   Commentaries include THE SEVENTH CURSE, KING OF COMEDY, MR. VAMPIRE 2, ISLAND ON FIRE, SCARED STIFF, EASTERN CONDORS, ENTER THE FAT DRAGON, and MISMATCHED COUPLES.  Enjoy and any feedback will be much appreciated.

Go ahead.  Give it a listen.  Or else Donnie will breakdance.
Posted by Kingwho? at Wednesday, October 12, 2011