STOOGES IN TOKYO (1991)
-
Recently, I was in a bit of a randy head space (this is a common feeling, of course) and decided to double-bill two James Wong Jim docu/mocku travelogues about sexual shenanigans in and around the Fragrant Harbor.  KEY TO FORTUNE and UNDER THE ROSE both plant tongue firmly between cheeks as we tour along the seedier side of HK with our trusted guide Uncle Jim. 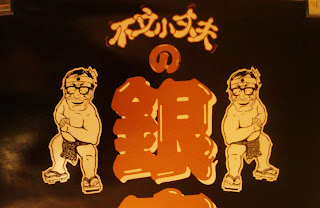 Uncle Jim was somewhat of a Renaissance man in the HK entertainment industry.  While it was not uncommon to have actors moonlight as recording artist and vice versa, Uncle Jimmy was also an accomplished film composer.  Among the 50 or so films James scored were PEKING OPERA BLUES, A CHINESE GHOST STORY, DRAGONS FOREVER, SWORDSMAN, BULLET IN THE HEAD, and ONCE UPON A TIME IN CHINA. 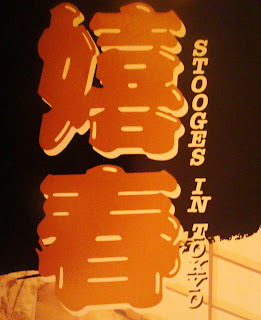 So, along with being an actor, composer, writer, director, and talk show host, James was HK's resident dirty uncle.  A tried and true perv and a reliable source for helping you acquiring an STD.  Other films that gave us sex the Wong Jim way were THE WILD GOOSE CHASE, JAMES WONG IN JAPAN AND KOREA, SCREWBALL '94, STOOGES IN HONG KONG, and it's companion film, for which I have this awesome scroll-like poster, STOOGES IN TOKYO. 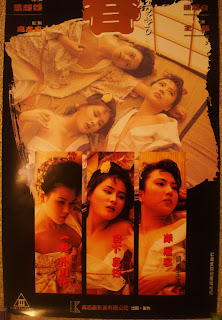 If your lookin' for a fun and dirty good time, turn on to any of the aforementioned Uncle Jim flicks and let this scamp lead you through the fray of HK naughtiness so you can sow your wild oats.  Just make sure your HMO covers a shot of penicillin.  You'll be needing one.
Posted by Kingwho? at Monday, October 17, 2011