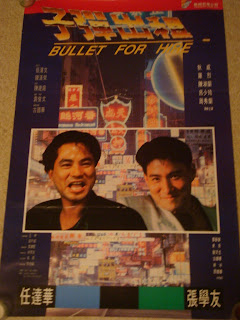 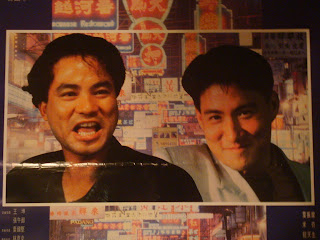 I tend to be a sucker for sweaty actioners circa the early 90's. Usually the cheaper the better. And if they are set somewhere in Southeast Asia's "Golden Triangle", then sign me up. This delightful period of filmmaking churned out such movies by the dozen. Though set in Hong Kong, Yun Juen-man's 1991 triad actioner BULLET FOR HIRE is a cut above the usual fare tapping stars Simon Yam and Jacky Cheung to play the leads in a somewhat tired tale of triad hitmen. That being said, the film stays afloat by injecting a touch of comedy into the proceedings. The comedy doesn't linger too long and action is the main force behind the film. The film also stars Elaine Lui. Unfortunately Lui's career didn't last long. A shame, since she had a wonderful screen presence and appeared to have immense talent. Both acting and action wise. She is most definately one of my favorite HK actresses. Above are poster images for the film. Sadly, sans Elaine Lui. And below, another oldie review from cityonfire.com. Enjoy.
Interpol has been conducting a study on the numbers of satellite triads that steming from Hong Kong. A top official from Interpol is in H.K. for discussions on curbing this global epidemic. Gun brandishing P.O. Elaine Lui is assigned to protect him from possible triad danger. And wouldn't you know it, hitman #1 Simon Yam outsmarts her and hits Mr. Interpol man post conference. After this take out, Yam's elder partner decides to hang up his 9 millimeter and their big boss furnishes Yam with a green, wet behind the ears, young upstart, Jacky Cheung. As the two get chummy and Yam schools Cheung on the triad game, events are set in motion for a showdown with Lui and the police force.
Made during the days when H.K. action cinema was watchable and Simon Yam's perm wasn't, director Yuen Jun Man's "BULLET FOR HIRE" is great early 90's filmmaking, and distracts the viewer from Yam's ugly fro. It's an erratic, irreverent, almost anything goes flick with comedy that's actually comical and some explosive action sequences that get the squibs bursting. The humor in the film comes from the interaction that takes place between the new gun pro Cheung an the old hat Yam as Yam teaches him the ropes. The downside to these comedic interludes is that action, on occasion, takes a backseat and causes the film to lag. I suppose these scenes are integral to the plot as they let us become better acquainted with the charming Yam and gullible Cheung, both hard core killers. So much time is spent with these two that we begin to root for them, even though they are on the wrong side of the law. A testament to their great acting and Yuen's filmmaking. Though the plot of the film is your basic triad morality tale involving brotherhood and such, "BULLET FOR HIRE" comes highly recommended.
Posted by Kingwho? at Tuesday, December 15, 2009