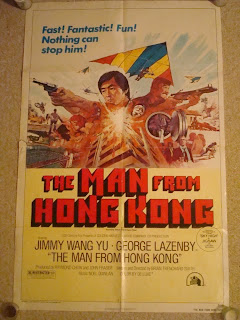 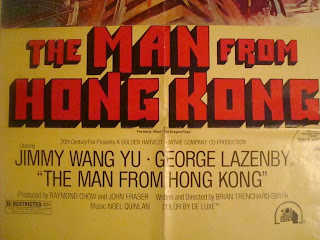 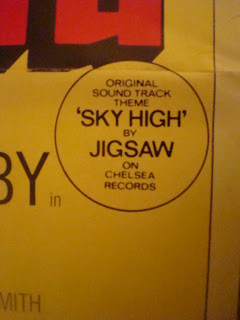 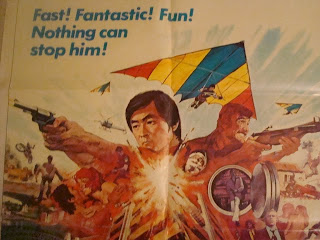 After watching the documentary "NOT QUITE HOLLYWOOD: THE WILD, UNTOLD STORY OF OZPLOITATION!", I felt the need to share my poster for one of the films commented on at some length in the doc. The simply awesome 1975 Hong Kong/ Austraila co-production, "THE MAN FROM HONG KONG", starring Jimmy Wang-yu, George "I played James Bond in only one film" Lazenby, and a brief appearance by Sammo "can I have another cha sha bao?" Hung. The documentary's talking heads are people who worked on the film including director Brian Trenchard-Smith, all of whom recall Jimmy Wang-yu as, "horrible", "a nasty piece of work", and "one of the two worst people I have ever worked with in my life". Lazenby recounts that Wang-yu had no respect for anyboby. Also told, Wang-yu felt that white women were scum and white actresses were worse than scum. As such he insisted on catching flies from the air and eating them before having to kiss his white female love interest. Wang -yu was so disliked by all that actor Roger Ward asked Trenchard-Smith, "look, do you want me to take care of Jimmy? Do you want to give me a hiding?" The "hiding" never occured. All of that smack being said, "THE MAN FROM HONG KONG" is one hell of an entertaining action-adventure. As for "NOT QUITE HOLLYWOOD"....Boobies for the fellas, John Holmes' hog (or razorback) for the ladies, and a wagon load of blood, carnage, and explosions for all to enjoy. YOU MUST SEE IT!
Posted by Kingwho? at Saturday, December 12, 2009