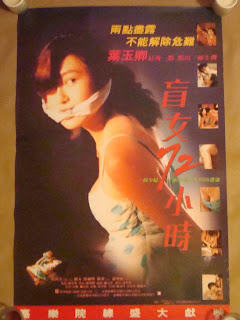 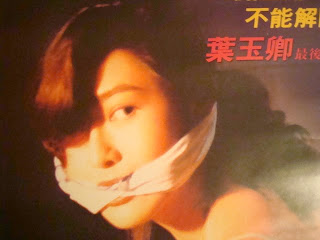 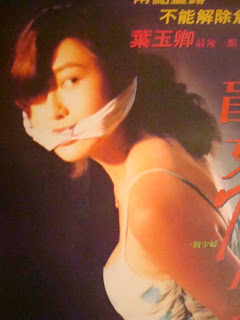 Above are poster images for director Chan Wing-chiu's 1993 Cat III thriller 3 DAYS OF A BLIND GIRL, starring Anthony Wong and Veronica Yip. Below is an ancient review I did for cityonfire.com. Check it out.

The plot of 3 DAYS OF A BLIND GIRL, aka Retribution Sight Unseen, is lifted in part from the Michael Apted film Blink, with Madeline Stowe as the main afflicted and Terence Young's, Wait Until Dark, with Audrey Hepburn as the tormented blind. This HK counterpart gives it that glorious Cat III punch and it's 'over the topness' makes the film surpass others in the genre.
Veronica Yip is struck with a loss of eyesight for 72 hours (some mumbo jumbo of ruptured blood vessels causing the damage). Her husband, a renowned heart surgeon, must leave her home in HK to attend a medical conference in Macau. By now you know what will occur in the remainder of the film because you've seen this device time and again. As hubby exits, Anthony Wong steps on the scene. Wong tells Yip he's an old buddy of the doc's and would like to thank him for performing life saving heart surgery on his wife. Yip informs him of her hubby's absence and politely invites Wong in for tea. The audience groans at her stupidity as we know Wong is there for good. Mayhem ensues and Wong chews scenery.
The typical cliches are enlisted-phone lines cut, light's go out, deserted home where no one can hear you yelp for help, and a HK favorite, the family pup served for supper. Wong's reasoning for catching the crazies is his cheating wife. Turn's out Yip's surgeon-hubby was treating/banging Wong's wife on the side as well as prescribing vitamins instead of heart medicine, thus leading to her death and Wong's psychotic vengeance. At one point in the film, delusional Wong tell's Yip,"He fucked my wife, I want to fuck his". All's fair in love and war, I guess, but Wong doesn't succeed. As Yip slowly regains her sight, she takes him on in combat, grabbing anything she can for defense, including a humongous frozen sausage, which she uses to whack him over the dome with. Hysterical, and worth the watch alone. Eventually, retribution sight is seen and Yip wins the battle-as if you didn't know that would happen.
What would a Veronica Yip movie be without nudity? A bad Veronica Yip movie. Since this one is not, we are treated to an unforgettable shower diddy, more funny than bone inducing, as Wong slips in behind Yip and mimics washing her. Wong's portrayal of the weirdo is like many other characters he had played in Cat III films of the time, more disturbingly absurd than menacing. His wardrobe stand's out in the film and is chuckle inducing. Along with his scraggly long hair, he dresses like a mountain-man from one of those Ricola cough drop commercials-clad in green hiking shorts and suspenders. There is also some choice banter between the two stars as Yip reveals that she sometimes thinks of Chow Yun-fat while making love to her husband, to which Wong replies,"How about Jackie Chan, Andy Lau, Aaron Kwok?". Adding in Richard Gere for the female gwailo in the crowd.
The movie is very well made and though some of the suspense comes off silly do to Wong's nut job performance, it is strongly maintained and reminded me of a Dario Argento shocker. The acting by Wong and Yip is quite strong and elevate the film above the standard Cat III thriller/ sex fare.
Posted by Kingwho? at Wednesday, December 09, 2009