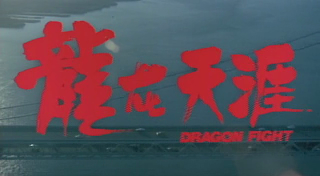 Billy Tang Hin-sing's 1989 crime-actioner DRAGON FIGHT is another film lensed in San Francisco. Before Tang was the Tang that we all have come to know and love (the CAT III Tang), he tapped 2 rising young stars, Jet Li Lian-jie and Stephen Chow Sing-chi for this above par action film. Dick Wei stars as the baddie and also does the action directing. For some fans of the 2 stars, this film is seen as a lesser effort, or a hiccup, on their path to stardom. I say it's a pretty darn good flick for both Li and Chow that fits in nicely alongside other HK action flicks of the late 80's.

Anyway, below are pics of a car chase scene through the streets of SF, a la Steve McQueen's BULLIT. These photos also show the intersection of Grant Ave. and California St, the same location I mentioned in my previous post about CHINATOWN KID. If you look toward the center of the picture, as Li and his wife Nina fly down California St, trying to elude a few of Dick Wei's dastardly henchmen, you will see a McDonalds. This is the exact same place that was the Chinatown Wax Museum back in 1977 and The Chinatown Food Court today! 1980's corporate greed take over a section of C-town. For a short while anyway. Mickey D's in C-town!? Did they serve General Tso's Chicken Nuggets? Durian Pie? Duck Egg Mcmuffin? A Big Mao? OK. that's enough of that. NYC's C-town still has a Popeye's Chicken and a Mickey D's smack dab in the middle of it. So I can't be too harsh on Mickey D's trying to gentrify SF's C-town once upon a time. 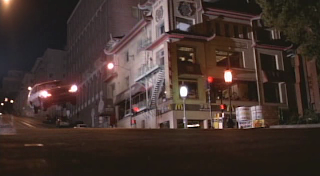 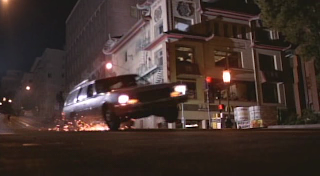 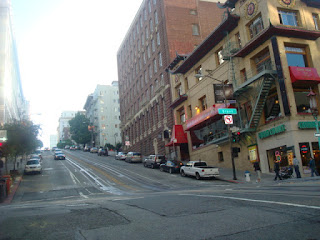 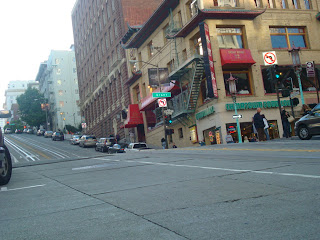 Below is the video to the chase scene. Pick the scene up at around the 4:05 mark. As Chow gets his ass handed to him by Dick Wei, Jet and Nina hop into their cool-ass station wagon and take off down California St.....leaving Chow behind!!!??? With friends like these....??? Anyway, Jet and Nina soar through the breeze at the Grant/California intersection near the 4:30 mark. Finally, the baddies car flips and explodes in a fiery, and fitting, end at around the 5:30 mark. Great scene. Enjoy!