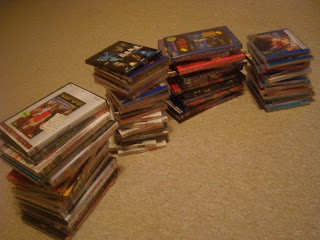 Hey guys! I'm back from my vacation in San Francisco and I brought (bought, cha ching, $$$$$) some friends home with me. 60+ Hong Kong films for about 230 bucks! Not bad. Had a wonderful time romping around and seeing the sites and boy are my feet, and wallet, tired. I had to pay an extra $30 on the flight back to NY for the checked bag full of HK flicks but 'twas a mere pittance. Don't look at me like that. You would do the same. I also got almost all of my blog homework done and hope to start posting some of the film locations that I spotted while sight seeing real soon. Or later? Or whenever? 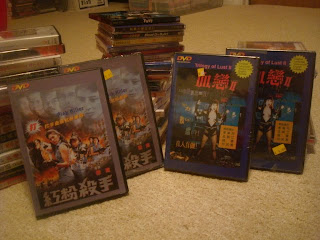 I was in C-town a few times and the HK movie pickin's were pretty paltry. On my last day in town my gf and I trekked back for a bit to do some souvenir shopping. Thanks to my gf wanting to drag me into a shady ass souvenir shop. In the back of the shop I struck gold. Go west young man. In the rear of this run down joint I found a ton of HK movies, old, new, and legit, strewn about all over the place. I spent the next 1 1/2 hours rummaging through the bins and stacks of DVD's and VCD's, taking home a few gold nuggets. I found some old World Video DVD's of PINK KILLER aka PINK PANTHER and the rare TRILOGY OF LUST II. If you remember, I reviewed TRILOGY OF LUST I a few weeks back and plan on reviewing part II soon. I have the gray market DVD which is dubbed in Portuguese and now I have the original HK version. I hope to review both version in the coming weeks. Both, PINK KILLER and TRILOGY OF LUST II only cost $4, so I bought the only two copies of each that the store had. I have issues. 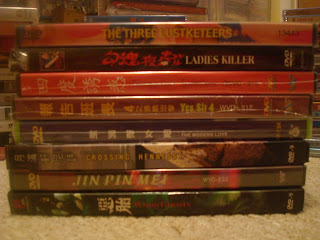 Found a few more gems (pictured above and below) while in SF. Came across a few more World Video DVD's in C-town; JIN PIN MEI, TEMPTATION SUMMARY II, and YES SIR 4. Some great VCD titles I picked up are the CAT III goodies DON'T STOP MY CRAZY LOVE FOR YOU and VIETNAMESE LADY, Daniel Chan Fai's artsy fartsy SLOW FADE, and obscure actioners FATAL DREAM with Karel Wong Chi-yeung, URBAN COP and CRAZY MISSION, both with Dick Wei. I also found the low budgeter STRANGERS MEET ON THE WAY with Yu Rong-guang, Jade Leung Chang, and Wayne Lai Yiu-cheung, the ultra rare and quirky Takeshi Kaneshiro/ Carmen Lee Yeuk-tung action-drama, THE ODD ONE DIES, and picked up another copy of the Athena Chu Yun throwback action pic TEMPTRESS OF A THOUSAND FACE. I found a copy in Boston's c-town about 2 year ago. Score. Outside of C-town I found a cool copy of the silly adult-comedy THE THREE LUSTKETEERS at Amoeba Music on Haight st. 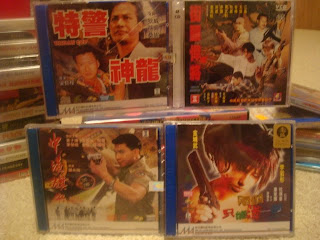 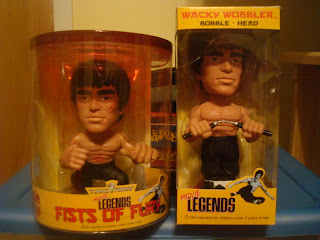 Found these two Bruce Lee bobble heads while walking around Sausalito. I just had to have them. $15 each and worth every penny. It was an excellent trip and I hope to return in the next few years. If you have not been to San Francisco, I cannot recommend this beautiful location any higher. Even though I have probably sapped the C-town HK movie supply (sorry 'bout that), If I could afford it, I would drop everything and move there without a second thought. Clean, great weather, kind people, and just lovely to look at. Anyway, I hope to share some of my SF experiences and goodies in the coming months. I also picked up a few new flicks too. The Tai Seng DVD of Simon Yam Tat-wah and Sandra Ng Kwun-yu in Alex Law Kai-yui's ECHOES OF THE RAINBOW, Dennis Law Sau-yiu's tired Japan spook inspired WOMB GHOSTS, and Jacky Cheung Hok-yau and Tang Wei in the rom-com CROSSING HENNESSY. I am waiting for the NYAFF to see ECHOES OF THE RAINBOW, and when I do I will report back on it. As for WOMB GHOSTS, this was a monumental turd. Stay far away. Law should be embarrased for putting this film out and should go back to hawking real estate. I watched CROSSING HENNESSY on the flight home and it was not as great as I had hoped, but it was rather delightful and breezy enough to warrant a sunday afternoon sit through.
-
A bit off topic, but I would like to say that I got engaged to my girlfriend while in San Francisco. So, now she goes from 'gf' to 'f'. I hope she'll be OK with the new moniker. I kinda like it! Hahaha With that being said.......back to the Hong Kong movie goodies!