The Sorcerer's Apprentice in NYC Chinatown 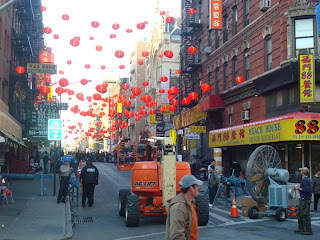 In April 2009 my fiance (I think this word sounds silly, so I don't plan on using it much) and I went into to Chinatown for dinner and DVD/VCD shopping. After a long and cold winter the warm air began to pop up and walking around C-town became more tolerable. During our travels we came across Eldridge St. at the corner of Division St. and the above scene. I immediately remembered a news report from a few days prior stating that Nicolas Cage was in the city shooting scenes for his upcoming Disney film, THE SORCERER'S APPRENTICE. I wasn't entirely sure if this set up was for the film, but after I enquired it was confirmed that this set up was in fact for the Cage film. I took a few shots from the closed off street/set. Also came across a really cool prop that was to be used in the film (pic below). So, as THE SORCERER'S APPRENTICE is about to be unleashed on the film going public, I figure I would give ya'll a glimpse of one of the sets used. I probably won't see the film. It's not my cup of tea. If any of you do see the film, let me know if you come across this c-town set up. 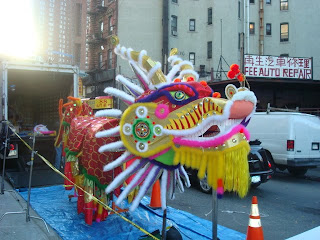 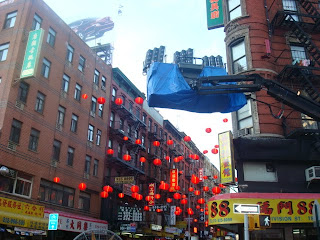 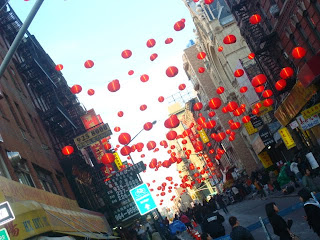 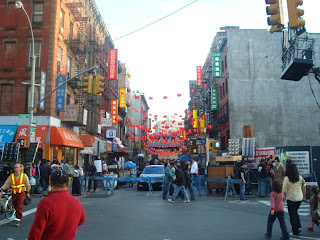 We kept our eyes peeled for a glimpse of Nic Cage but we couldn't spot anyone with a rats nest hairdo. After the thrill was gone we made our way to my usual HK DVD/VCD haunts, spent $ I didn't have on way too many HK movies, then tried a new spot for dinner. We contemplated hitting our favorite eatery, Big Wong's, but decided to try Big Wong's sister location just up the street, Big Wing Wong's. Same greasy chopstick atmosphere and same cheap and tasty food. Pretty nice spring day in Chinatown.