"I'll prick you to dead, thief" 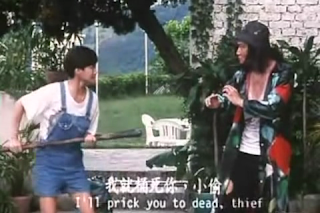 The lovely Chan Wing-chi is mad as hell and she isn't going to take it any more! Seen here in the 1993 CAT III sex comedy, A MAN AND A WOMAN aka A WOMAN & A MAN '93, she vows to prick Michael Tiu Dai-yue to dead! Be advised, the two become fast friends and Dai-yue pricks her a few times later in the film. Wing-chi only suffers "a small death." Look for a few more fun subs from this pic in the future.

Email ThisBlogThis!Share to TwitterShare to FacebookShare to Pinterest
Labels: A Man and A Woman, Category III, HK Subtitles, Nonsense