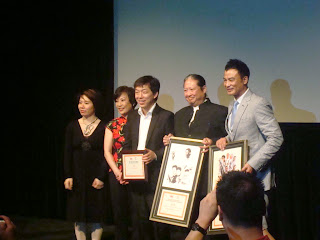 Family Day
-
One of the better photos I took from the fest this evening. My camera is a bit old and I've been meaning to upgrade but have been to lazy to go and take a look at all of the pretty and sleek newfangled photo contraptions that are on the market these days. Tonight, laziness bit me in the arse as my camera pooped the bed and took some god awful shots. Out of about 100 shots, 10 are 'barely' usable. The above pic of the awesome award ceremony was the best one. It goes downhill from there. I'm planning on switching cameras tomorrow and hopefully taking better pics from here on in. Knock on wood. But, I was there. And it was unforgettable.
I also took some video of the awards ceremony but haven't taken a look at that yet. In the above pic you can see Simon Yam Tat-wah, Sammo Hung Kam-bo, Huang Bo, and the lovely lady in red is the legendary Angela Mao Ying. She was a surprise special guest on hand to present Sammo with his Lifetime Achievment award. How awesome is that?! Hopefully the video turns out better than the pics? I hope to fully report on this weekend sometime next week. But, as you know, i'm lazy. If and when I get to it, I get to it. Hahaha
Posted by Kingwho? at Friday, June 25, 2010