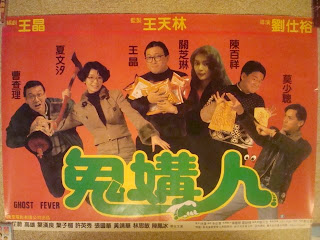 GHOST FEVER (1989)
Great poster for the 1989 ghost-comedy GHOST FEVER. The script was penned by schlocky Wong Jing and stars a handful of A-list heyday players....including my master Charle Cho Cha-lee. Starring alongside my sifu are Pat Ha Man-jik, Nat Chan Pak-cheung, Max Mok Siu-chung, Wong Jing, and the beautiful Rosamund Kwan Chi-lam. The film definitely wears it's time and place in HK cinema history on it's sleeve, vacillating between silly comedy and the spooky spooky. It's a fun hybrid that was common around these days of being wild in HK cinema. Director Lau Shut-yue only has a brief filmography but has made a handful of fine ghostly laughers including GHOST BUSTING, MY NEIGHBORS ARE PHANTOMS, LOOK OUT, OFFICER!, and FORCED NIGHTMARE. 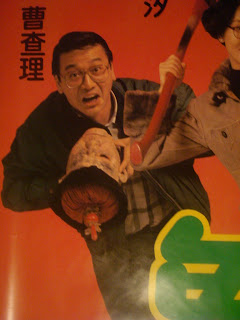 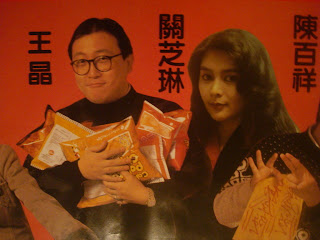 Wong Jing and Rosamund Kwan Chi-lam
-
Recently, and unfortunately, Ms. Kwan has announced her retirement from the Hong Kong film biz. Though she hasn't appeared in a film in 5 years, she has made her decision final as she plans to concentrate on a real estate endeavour. She will be missed by many fans of HK cinema as she was always an asset to any production. Beautiful, talented, and consistently alluring in the films she appeared in. One less class act in the industry. But we still have Angelababy! So things kinda even out. Oy vey. 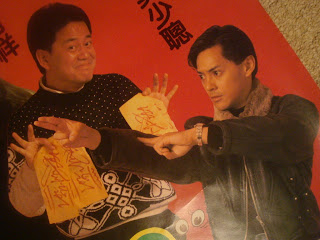 Below is a brief clip from GHOST FEVER. This scene shamelessly rips off a dinner party scene from Tim Burton's wonderful BEETLEJUICE. Unfortunately, the GHOST FEVER diners don't break into Harry Belafonte's work-up of 'The Banana Boat Song', as it was memorably done by Catherine O'Hara and bunch. Still a funny scene none the less. Enjoy!
-
On a side note, I have no idea how to get youtube videos placed properly on the blog without having the edge of the video cut-off? I welcome any and all answers. Thanks.