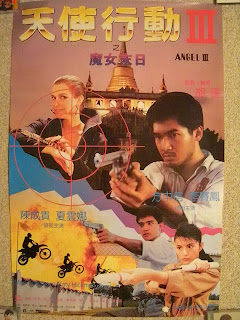 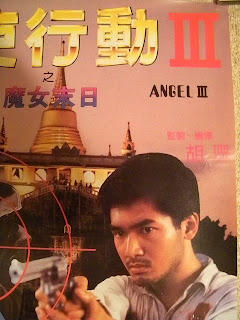 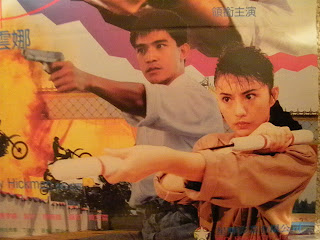 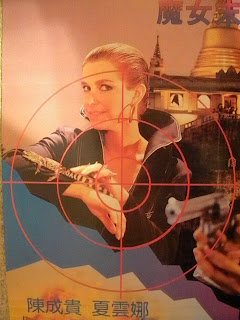 Poster for the 1989 heyday actioner ANGEL III. ANGEL III was the final film in the ANGEL series and the second to be directed by Teresa Woo San. All three films stared Moon Lee and Alex Fong as part of a team dubbed "The Angels", this installment sadly missing the third Angel, Elaine Lui. The ANGEL films were, I believe, my intro into the 'girls-with-guns' sub-genre of HK cinema. I bought the first ANGEL film on VHS from Xenon video under the title MIDNIGHT ANGELS. I bought it from The Wiz. Because nobody beats him. I also bought the second part of the trilogy on Xenon VHS from Mr. Wiz, MIDNIGHT ANGELS II. If I can find them, i'll surely post. This installment was the most wild of the trilogy, moving the action from HK to Thailand. In quite possibly one of the most unforgettable and off-the-wall scenes ever to come out of HK, Alex Fong and Chan Shing-gwai don jet packs and fly around gunning down the baddies. If you are on Facebook, please check out the fun fan page tribute to the one and only, Alex 'Jet Pack' Fong.

Below, the infamous scene. Enjoy.