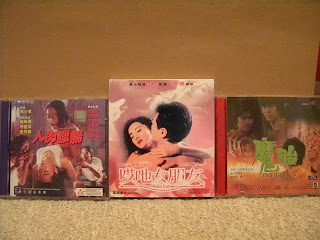 Some more VCD's from my collection. Some excellent titles, if not excellent movies, in this batch. THE UNPUBLICIZEABLE FILE is a cheap and dirty Cat III thriller from 1993. The only name of note in this THE UNTOLD STORY rip-off is excellent character actor William Ho Ka-kui. It sometimes appears as two separate films smushed together, and quite possibly is. The two separate paths do eventually cross though and the film is satisfying in it's Cat III excess, ie. boobies and blood. Good times. 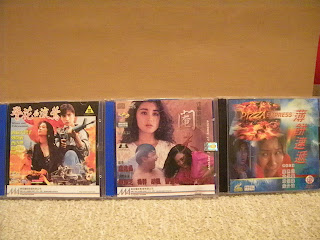 Whore and Policewoman, Another Piece of Romance, Pizza Express

Another fine title and film is the 1993 actioner WHORE AND POLICEMAN, starring Michiko Nishiwaki, Julia Cheng Yim-lai, and one of my favorites (and profile pic), Charlie Cho Cha-lee. It's a kind-of by the numbers action flick with moments of stylish Cat III givings. It was directed by Wong Gwok-chue who also directed Michiko in another Cat III goodie, PASSIONATE KILLING IN THE DREAM.
Charlie Cho Cha-lee headlines another flick shown above, the wacky adultery flick, ANOTHER PIECE OF ROMANCE. This one concerns a gaggle of spurned wives who seek out revenge on their philandering husbands. The film includes a bunch of trans genders (nudity included!), as well as a transgender Anita Mui look-a-like!? A funny scene to watch for and behold is Charlie Cho getting his comeuppance as his wife slices off captain winky and tosses it into a flock of ducks. One of the duck's runs off with Cho's dismembered member in it's bill. Hysterical stuff! 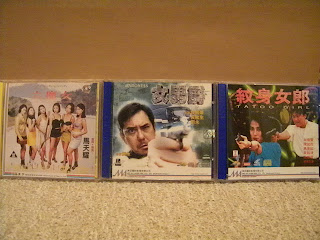 A few others that I advocate looking for are the 1983 horror film DEVIL FETUS, the low budget 1996 Cat III crime film THE SIX DEVIL WOMEN, starring "Mystical Breasts" Diana Pang Dan, Jimmy Wong Shu Shu-kei, and William Ho Ka-kui, and finally 1992 Cat III comedy FALSE LADY. The latter is a HK variation of the 1991 American film SWITCH, directed by Blake Edwards. All three are satisfying entries in their particular genre. One to avoid like sickly looking cat is the B&S produced PIZZA LOVER. It's a shot on digital video piece of turd starring absolutely no one you really care about. If you remember from my THERE'S A GHOST IN THE BOYS ROOM post, B&S was that low budget production company that produced shit fest after shit fest with only a few nuggets rising to the top.

Also of note here is the Anthony Wong Chau-sang film BARONESS. Now, while the film isn't anything to seek out, it is the first VCD I ever purchased. It was around the year 2000 and I was a frequent visitor to a nearby flea market that had a kung-fu VHS stall run by a few shady characters. They were duping HK flicks to VHS and selling them for 10 bucks a pop! As I mentioned in previous posts, at this particular time, there weren't that many outlets to by HK flicks. These guys were no better than the gray market companies I was dealing with but they were at least $10 cheaper. So I frequented their little stall of ill repute almost daily, scoring a "good" deal every now and then for being a frequent flyer. Eventually they branched out and added a few overpriced VCD's and DVD's as these formats became better known and available. Among the dozen or so VCD's they randomly had in their janky glass display case was a one, BARONESS. It caught my eye being as it had the one and only Anthony Wong Chau-sang on the cover and also because it was a brand new release and they were hard to come by. I think it cost about $12? I returned the next day, again plunked down $12, and picked up my second VCD. The 1998 action flick THE BLACKSHEEP AFFAIR. Yeah, so maybe I was a little bit of a late VCD bloomer? But now I own well over 1,000, so I think I've made up for it.
Posted by Kingwho? at Monday, February 08, 2010