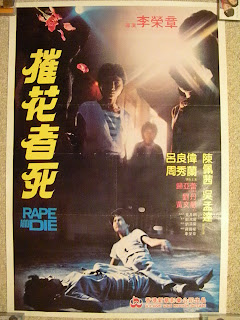 Poster for the 1983 crime drama RAPE AND DIE, directed by Lee Wing-cheung. The film presents a CAT III title paired with a CAT III premise. The follow through, though, is lacking that oh-so satisfying CAT III panache, which makes it a little disappointing for filth and funk genre enthusiasts looking for a nice late night flick to tuck them into bed. The title seems more suited for a film like Billy Tang's wonderfully deranged RED TO KILL, but the story unfolds in a cautionary after school special kinda way. With, of course, a few nasty elements thrown in to put asses in the seats. Filmed in a tight, sweaty, and low class tenement area of Hong Kong, the film follows the story of a fractured family using the tired story of parental indiscretion leading to troubled youth. 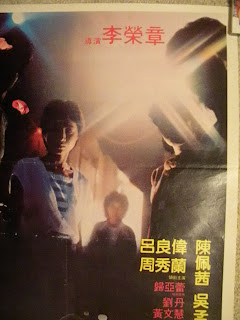 Elaine Chow Sau-laan is the focus of this dark feature and this poor girl is put through the ringer. To start, she has her first monthly visit from auntie flow while in gym class and then proceeds to get ridiculed by classmates. A scene reminiscent of Brian DePalma's CARRIE, less the playtex chucking. Poor little poor girl. And from here, thing's just go downhill quick. Her mom's dirtbag boyfriend, played by and early and afroed Ng Man-tat, pimps the mom out for pocket money. Trying to find solace in her estranged pops arms she also discovers he has a taste for ye ole in-out with women of the night. She then latches on to a friend working as a PR hostess who gives her a job as a 'fish ball girl'. Thanks to Otto Chan and James Wong's sex "documentary" UNDER THE ROSE, I have learned that 'fish ball girl' is the slang term for a teenage prostitute. 'Fish ball' referring to the size of their chest. Thanks again Otto and James! Love you. She reconciles with mom, moves back in, and dirtbag Man-tat rapes her (hence the title). She becomes pregnant with his demon seed, tries to get an abortion, both underground and by self means. Some silly side story involving a young Ray Liu and some triads is used as filler. She gives birth. Tries to dump the newborn in the trash. Almost gets caught by the po-po. Runs. Bumps into Man-tat. He tries to rape her...again. She stabs him about his happy area with a broken bottle and he dies (hence the title). Her mom takes the rap for her. The end. 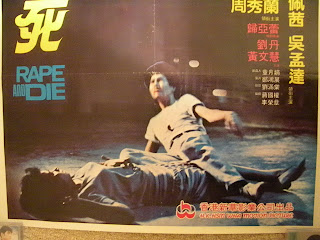 As seedy as the film sounds, you know, raping and dying and dumping babies in the garbage and such, it is filmed as a more dramatic piece. The combination of dirt and morals is presented here as a mixed bag. The story could have definitely worked well on it's own as a dramatic piece but I doubt would have found a following. And adding a little sex and blood rarely hurts a film so....why not? If the film were made ten years later during the high water mark of the CAT III genre, who knows the heights of trash this film could have achieved?! As is, RAPE AND DIE is not a bad film. It just should have been more. Trash and moral wise.
Posted by Kingwho? at Wednesday, February 17, 2010