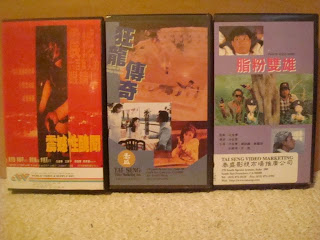 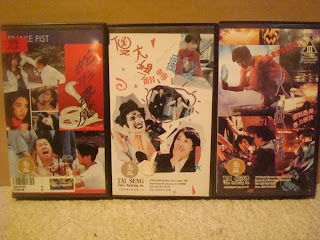 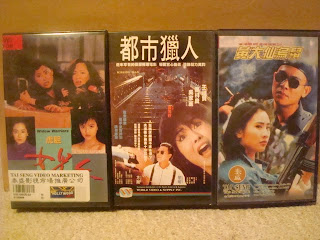 A few more VHS from my collection. A couple of really cool and few crappy titles in this batch. The Raymond Lee directed POLICE CONFIDENTIAL is a really cool flick starring Simon Yam and Zhang Feng-yi. It's an underrated mid 90's crime drama. I think I also have the vcd somewhere? Raymond Lee directed a handful of excellent films during his relatively short career including well known classics like DRAGON INN, and had his hand in the SWORDSMAN series. You might want to check out some of his other titles, REBEL FROM CHINA, THE KILLER'S BLUES, AND BLUE LIGHTNING. But you will want to stay miles away from his stinker thriller FATAL OBSESSION. Above you will also see the ultra cool, ultra un-PC Sammo Hung action comedy PANTYHOSE HERO. Excellent fight scenes coupled with uneasy homosexual jokes!? Homophobic action at it's most awkward....AND awesome! Good times! A shit title of note that I actually recall watching, meaning it was such shit that it stuck to my brain like....well, shit to a blanket, is the Taiwanese cut and paste project SNAKE FIST. 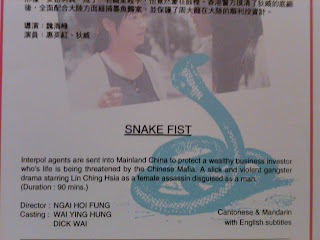 SNAKE FIST is a piece of crap smush 'em up actioner that appears to be an unfinished project slapped with a connecting portion using name actors. This garbage 'stars' Dick Wei, Kara Hui Ying-hung, Billy Chow Bei-lei, and Alan Chan Kwok-kuen. Actually, the portion of the film involving these actors runs about 15 minutes and it only serves to poorly connect this turd of a film. The story concerns a female assassin disguised as a man. The actress playing the hitman....or woman, part is named Lam Ching-ha. Her name kinda resembles another actress of the era who was famous for playing men. Lin Ching-hsia, of course. This must have freakin' blown the minds of the fine folks over at Tai Seng Video Marketing Inc. So much so that the synopsis on the back of the VHS case describes the film as, "A slick and violent gangster drama starring Lin Ching Hsia as a female assassin disguised as a man." Damn, I love Tai Seng. And some poor sap probably paid 40 bucks for this winner. Remember those days?
Posted by Kingwho? at Monday, February 01, 2010