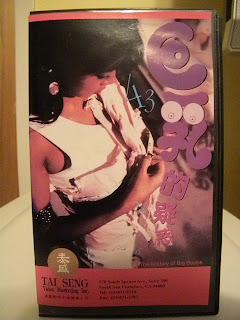 The Mystery of the Big Boobs 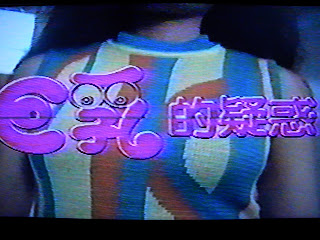 They're staring at me! 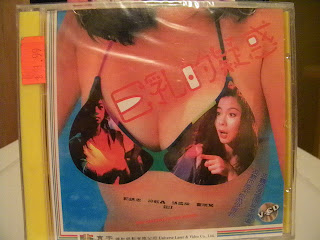 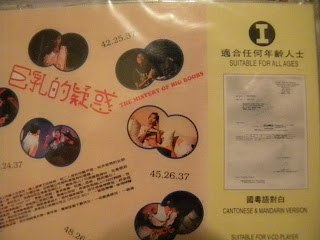 Before I begin this post I would just like to wish everyone a....in my most awkward anglicized pronunciation....to all of the Cantonese speaking boys and gals out there...GUNG HAY FAT CHOI! SAN NIN FAAI LOK! And I musn't forget my Mandarin speaking friends...GONG XI FA CAI! XIN NIAN KUAI LE! I would also like to say...in my cleaned up, intelligent to the ear, trying not to sound too much like a 'New Yawker' verbiage, HAPPY VALENTINE'S DAY! And now on with the show! It's the Year of the Tiger! RAWR! It's also Valentine's Day. And to celebrate, I tried to figure out what connects these two good time holiday's. And I came up with boobies. Boobies are fun, just like these holidays. I celebrate boobies, just like these holidays. And boobies come in two's....most of the time....just like these holiday's. Well, this year anyway. THE MYSTERY OF THE BIG BOOBS aka THE MYSTERY OF BIG BOOBS, is quite possibly one of the best titles ever! I prefer the misspelled title of the VHS and VCD pictured above, THE MISTERY OF BIG BOOBS. Because who needs a "Y" when you can have an "I"? Unfortunately the film is a monumental shitter. It's a shot on video G rated craptacular directed by Jeng Wing-chu, who also directed the very fine DEMONESS FROM THE THOUSAND YEARS and THE ROAR OF THE VIETNAMESE. Coming into this film knowing that the director had previously made some fine cinema, one expects something similar in range. At least production value. Clifton Ko Chi-sum produces this unsubtitled refuse that hasn't a hint of living up to it's wonderful Category III title. The title may lead some to believe the film might be something along the lines of a Cash Chin "coming of age" skin flick like THE FRUIT IS SWELLING, THE FRUIT IS RIPE or just a ripping Cat III sex romp detective yarn containing rather large mammaries as the macguffin? Neither is true as this crap wears out it's welcome within the first 10 minutes. The film stars FULL CONTACT whore Bonnie Fu Yuk-jing and the lovely Crystal Kwok Gam-yan. I'm sure you remember Ms. Bonnie Fu from FULL CONTACT? She was the one with "a vomiting crab" in the hole in her underpants. I would much rather have a vomiting crab in the hole in my underpants than sit through this shit again.