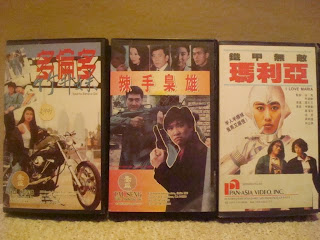 Toronto Banana Gal, Revenge of Scar Face, I Love Maria
TORONTO BANANA GAL appears to be an unsubtitled shot on video shitter. But with an awesome title. The big names here are Hugo Ng Doi-yung and Nora Miao Ke-hsiu. I tried to wade through this crap for you guys but this garbage was like Nyquil. It helped me get my zzzzzz's. REVENGE OF SCAR FACE is a 1992 low budget actioner starring Ken Lo Wai-kwong. A few decent action scenes but largely ho-hum. And of course everyone here should already know about I LOVE MARIA. I featured the poster for this immensely enjoyable flick a few posts back. 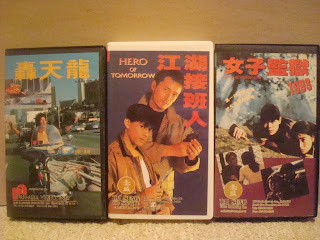 Fury in Red, Hero of Tomorrow, Female Internment Camp
FURY IN RED is a fine action film from 1991 starring Robin Shou Wan-bo, Ben Ng Ngai-cheung, and Conan Lee Yuen-ba. It's by the numbers and resembles many other films of the era but is worth your time. HERO OF TOMORROW is another fine film. Max Mok Siu-chung and Michael Miu Kiu-kwai headline this familiar triad action drama. Director Poon Man-kit is well known for his big budget epics like TO BE NUMBER ONE and LORD OF THE EAST CHINA SEA films and is a director who takes great care in his films. HERO OF TOMORROW is no exception. FEMALE INTERNMENT CAMP is another unsubed shot on video disappointment. This film is curious to me because director Andy Chin Wing-keung seemed to have been an established director with films like GIGOLO AND WHORE II, CALL GIRL '92, and the sudsy soapy action melodrama LOVE AMONG THE TRIAD. After FEMALE INTERNMENT CAMP, Chin went on to direct a handful of fine flicks, leaving this crapper a curiosity piece. It was financed by the mainland, and doesn't appear to have any dirty exploitation elements the sweet title suggests, so I assume it was for mainland TV. I could do a little more research on the film but i'm lazy so I won't. 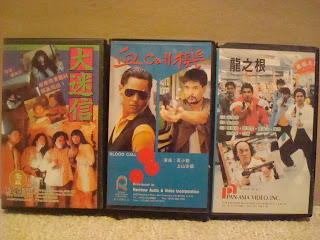 The Supernormal, Blood Call, The Son of Dragon
THE SUPERNORMAL is a documentary and admittedly, I have yet to watch it. It's at the low end of my ever-growing stack of movies I want to watch. BLOOD CALL (aka BLOODBATH 23 AKA LIFE GAMBLE 23) is a nicely filmed moody thriller from 1988 starring Max Mok Siu-chung, Eddy Ko Hung, Charlie Cho Cha-lee, Michael Chow Man-kin, and Maria Tung Ling. Seek this one out. It's a rare gem. THE SON OF DRAGON (aka SON OF DRAGON, aka DRAGON ROOT) is a dime a dozen actioner straight out 1992 starring Cheung Kwok-keung, Philip Ko-fei, and the late Kwan Hoi-san. It's directed by character actor Addy Sung Gam-loi who looks like the Crypt keeper. He is also referred to as Big Little Eye, and if you see his lovely mug you will know why. THE SON OF DRAGON is just as action films of the early 90's should be. Low budget and sweaty. I'm a sucker for this kind of film and I recommend THE SON OF DRAGON highly, even though you've seen it before.