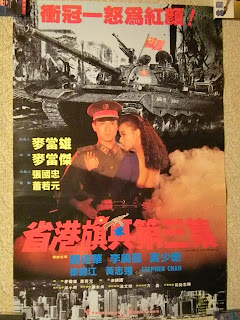 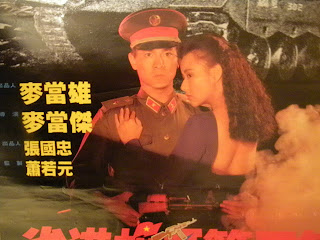 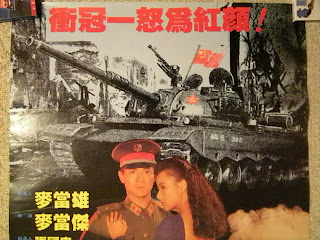 Poster for the 1989 crime/ action/ drama LONG ARM OF THE LAW III. More "China bad, Hong Kong much much better" shenanigans as Andy Lau, wrongly sentenced to death, dodges the firing squad on the Mainland and high tails it to glorious Hong Kong. Though seemingly run of the mill in it's premise and execution, there appears an urgency in the time the film was produced. 1989 was a sad and important year in Chinese history. Though the film was made a few months prior to the beginning of protests in Tiananmen Square and ultimately their violent ending, these unfortunate confrontations seem to elevate the film from pedestrian into something timely. You can check out the poster for part II here: http://inthemoodforgwailo.blogspot.com/2010/01/long-arm-of-law-ii-1987.html
I don't have the poster for the LONG ARM OF THE LAW I so don't go getting all excited and expecting to see it.