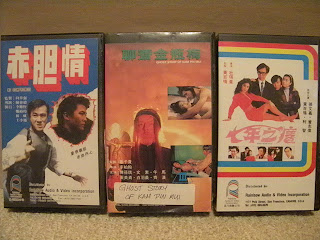 No Compromise, Ghost Story of Kam Ping Mui, Seven Years Itch
---
A few more VHS goodies here. Kickin' it off with the former British Colony's favorite movie cop, Danny Lee Sau-yin, in the 1988 crime actioner NO COMPROMISE. Lee has made soooooo many of these po-po pics that they are almost indiscernible from one another. NO COMPROMISE is no exception, but still a pretty decent cop flick. THE GHOST STORY OF KAM PING MUI is a CAT III variation on the A CHINESE GHOST STORY theme. It's a cheaper version of the EROTIC GHOST STORY series. But it has boobies so it's a winner! SEVEN YEARS ITCH is a comedy from the late 80's directed by Johnnie To Kei-fung. It's written by and stars Raymond Wong Pak-ming and that is usually a recipe for disaster. But the film also stars Sylvia Chang so it's worth a shot. And it's early To. Nothing great but worth a look. 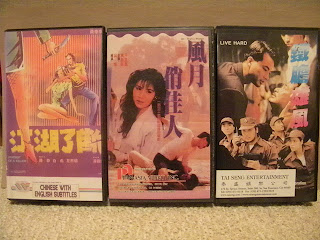 Pursuit of a Killer, Oh! Pretty Woman, Live Hard
---
PURSUIT OF A KILLER is a 1985 action/ thriller directed by Taylor Wong Tai-loi. You might know Wong from his triad opuses starring Chow Yun-fat, RICH AND FAMOUS, it's sequel TRAGIC HERO, and TRIADS-THE INSIDE STORY. I much prefer his CAT III classics GIRLS UNBUTTON and SENTENCED TO HANG. One of my first blog posts was the poster for GIRLS UNBUTTON, so you should check that out. SENTENCED TO HANG was reportedly the first film to receive the CAT III rating! HOORAY! OH! PRETTY WOMAN is a CAT III adult drama from Taiwan. It supposedly was released around 1991 but looks to be made way earlier. And it's a turd. Avoid it. LIVE HARD may sound like a cool porno but it's actually a 1989 actioner starring Simon Yam, Lau Ching-wan, and Elaine Lui Siu-lung. It's a fairly entertaining yarn but nothing you haven't seen before. It's star power makes it worth seeking out. 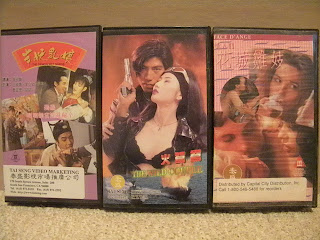 The Demon Wet Nurse, The Wild Couple, Face D'Ange
---
THE DEMON WET NURSE aka MADAME FUNG SHEN'S LOVER is a 1992 CAT III period piece boobiefest written by Titus Ho Wing-lam. Mr. Ho has had his dirty little hand in such cheap titles like VIAGRA MADNESS, ROYAL SPERM, and LSD BEAUTIES. I have yet to watch the film. But i'm actually going to throw it on now. I could go for some afternoon naughtiness. Titus (such a cool name) also directed the classic gross out horror film RED SPELL, SPELLS RED. He is also the writer of an excellent adult drama/thriller FLIRTING. Do yourself a favor and seek these last two films out. Great HK cinema! THE WILD COUPLE is a rather disappointing action flick from 1996, directed by legendary action director Ridley Tsui B0-wah. The awesome cover art captures one of my favorite HK actors, Roy Cheung Yiu-yeung, and CAT III scream queen Lily Chung Suk-wai. Looks like a winning romp! It's not. It has it's fine action moments but the film is largely dull. FACE D'ANGE is a slow and unappealing HK produced CAT III boink-a-thon. If memory serves my correctly, the movie takes place somewhere in Europe? The cast is mainly naked Caucasians who appear to be allergic to clothing. An interesting variation here, FACE D'ANGE has sex scenes involving an Asian man (sometimes two) and a Caucasian woman. It's usually the other way around. The film features gobs and gobs of soft core sex and nudity but is terminally slow, dirt cheap, and just plain crap. I like soft core shenanigans just as much as you, but even I find it difficult to wade through muck like this.