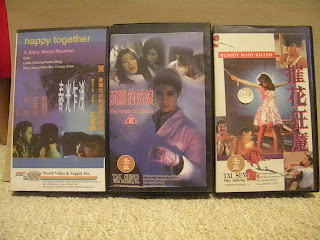 Happy Together, The Wrath of Silence, Bloody Mary Killer
Some more of my ever growing collection. Pretty cool World Video VHS of Wong Kar-wai's HAPPY TOGETHER. It's a double VHS a la many a Tai Seng VHS title. Beautiful movie. THE WRATH OF SILENCE is a pretty sweet thriller starring Anita Yuen Wing-yee and Takeshi Kaneshiro. Directed by the middling Frankie Chan Fan-kei, the film was produced in 1994, around the high water mark of the CAT III sensation and while not mentioned in the same breath as genre classics like RUN AND KILL, RED TO KILL, or THE UNTOLD STORY, the film definitely has it's place. The VHS shown above is actually a copy of the movie. Early on in my HK movie collecting frenzy there was a nearby video store that had a few hundred HK flicks on VHS. I may have mentioned it before. Stocked mostly with Tai Seng or copies that they bought from a gray market company (I think one of the video stores owners ran his own gray market company?) This was the days well before the Internet and as the only local product were about a dozen or so overpriced Tai Seng titles, I bought a dual deck VCR and began copying. I copied hundreds. As time went on I would, and still do, update my copies with legit VHS, VCD's, or DVD's and get rid of the old copied films. I have since updated my copy of THE WRATH OF SILENCE and now have a legit VHS and VCD. This old copy was readily available so I took it's picture. BLOODY MARY KILLER aka UNDEFEATABLE is a Godfrey Ho shitter starring Cynthia Rothrock. Godfrey Ho. Shall I go on? 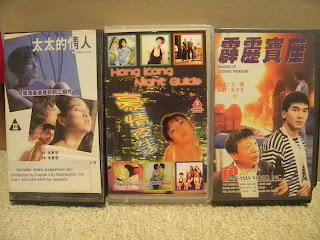 MY WIFE'S LOVER is a 1992 adult drama about infidelity. There is a nice amount of soft core goodness for the pervs but little else on offer. Director Kevin Chu Ga-wang is a member of the Hong Kong Film Development Council, a collaboration who's aim is to support HK films in other Asian markets. A link to their site is at the bottom of this post. Check it out! HONG KONG NIGHT GUIDE is a faux documentary about the sex industry throughout HK. It's akin to Otto Chan's UNDER THE ROSE and KEY TO FORTUNE. The VHS pictured above is a copy like THE WRATH OF SILENCE. I have yet to upgrade this film but will eventually do so. I only have a few dozen 'copied' HK flicks left on VHS. The majority are rare and either extremely hard to find or OOP. My goal is to get legit copies and to phase these fake ones out. I'm running out of room! As for HONG KONG NIGHT GUIDE, I am hoping to put up a review and some screen shots pretty soon. So watch for that. THE RAIDERS OF LOESING TREASURE aka THE RAIDERS OF LOOSING TREASURE aka THUNDER MISSION (yes it's 'Loesing' and 'Loosing') is a 1992 action film starring Mr. Alex 'Jet Pack' Fong Chung-sun, Wu Ma, and Michiko Nishiwaki. It's an OK yarn involving a fair amount of action and ninjas. Action? Check. Michiko? Check. NINJAS???? CHECK! You could do a lot worse on a rainy weekend afternoon. I would suspect this film would be better enjoyed by HK cinema fans than the casual viewer though. Be advised.
Link to the Hong Kong Film Development Council: http://www.fdc.gov.hk/NewAction/en/home/home.htmhttp://www.fdc.gov.hk/NewAction/en/home/home.htm
Posted by Kingwho? at Friday, March 19, 2010