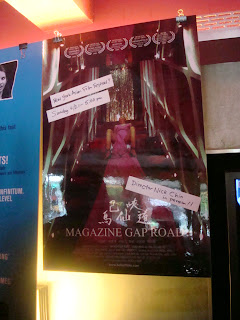 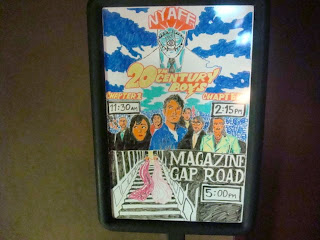 I was lucky enough to attend a few special screenings last year at the New York Asian Film Festival (NYAFF). Held at the IFC Center in the West Village of NYC and run by the fine folks over at Subway Cinema. It's a bit late (as is this entire blog) but I hope to post a few pics of the films and people I met at the fest. Up first is Nicholas Chin and his first full length feature film, MAGAZINE GAP ROAD. Chin's film is a molasses moving meditation on broken lives that mingle and crash together amongst the upper class backdrop of HK's Victoria Peak. If you didn't know, Magazine Gap Road is an actual road on Hong Kong Island that leads up to the Peak. If you were to look at a capsule review of MAGAZINE GAP ROAD, you might be lead to believe the film is something that it's not. One such review might read: Elvis Tsui Kam-kong stars as a broken down, boozing, ex-cop who has a chance at self redemption as he tries to rescue a high price call girl from hooker oblivion! Sounds like a kick-ass CAT III goodie! A bit cliche? Sure. But it has Tsui Kam-kong and hookers! Score! A CAT III film MAGAZINE GAP ROAD is not. Though it's themes and a little violence scrape that loving film rating, this film aims to be much more. I'm not quite sure it succeeded. 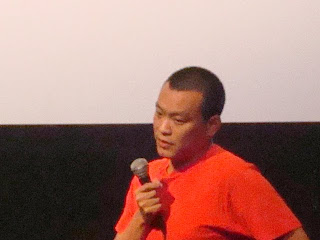 As I mentioned above, the film is slow moving. This is only partially forgiven by the talent on screen. Chin was fortunate enough to tap a few wonderful HK actors who play there parts to perfection. Tsui Kam-kong, Jessy Meng Guang-mei, and Richard Ng Yiu-hon are quite excellent and hold this film by the young rookie Chin together. Richard Ng Yiu-hon's son, Carl Ng Ka-lung, who I have seen in a bunch of films, is the weakest link. He is HK's Hayden Christensen. He is tough to watch. His performance is wooden and his speech is monotone. Chin's forte is photography and while the film has it's narrative shortcoming's, it is quite sharp, clean, and beautiful to look at. Chin knows how to film a movie. Writing one on the other hand, he appears to need some seasoning...

Case in point....after the screening of the film Chin was on hand to be interviewed by NYAFF MC Grady Hendrix as well as take questions from the audience. I wish I had better pictures to show you but my camera sucks. In those pics you would see a nervous young man who appeared very unsure of himself. Hand grabbing the back of his neck. Not speaking into the mic until an audience member yelled out to him to do so. A question from the audience was raised as to why, in a film concerning prostitutes, was there no nudity or sex scenes? Now this is my kind of audience member and question! Good job sir! Chin was forthcoming and seemed honest in his reply, finally saying that he was, "kinda shy and scared to ask them to take there clothes off." He saved himself slightly by also saying that, "this wasn't that type of film." OK. I can get on board with his rationale. I would have prefered....well, you know what I would have prefered. But I understood his reluctance. Maybe this film wasn't "that type" of film. I believe him. But with these answers, the former at least, he shows immaturity. I just think of a director being bold and omniscient. There is no "shy" and "scared". This cautiousness is transparent in the film and while not a total misstep, the film is also not a total success. But I suppose as Chin is a new filmmaker, I can forgive him. A little. 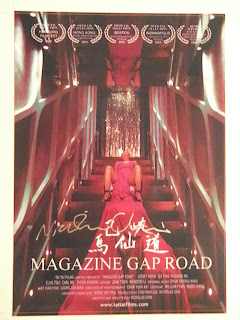 On the way out of the theater after the Q&A I managed to stop Nick and ask for an autograph. I wasn't a total geeky fanboy as I was with John Woo. I told him how much I liked his film, which was the absolute truth at the time. I didn't lie. My mind wasn't made up until my train ride home when I was able to sit and digest the film properly. It's a film that needs marinating time. Nick was gracious and signed a glossy photo of the poster that I had printed out (pictured above). Chin appears to be a very talented filmmaker. I can comfortably give MAGAZINE GAP ROAD a slight recommendation. If Chin grows a bit in his form and proves it in his content, I will definitely be in queue to see what he has to offer.

OK. A little fun here. So, below is a video that shows part of the Q&A session with Nick Chin after the screening of MAGAZINE GAP ROAD. The question that I had mentioned above, about why there isn't any nudity or sex scenes in the film is asked at approximately the 0:42 mark. Nick gives his answer. At about the 1:06 mark you can hear me, mockingly "BOOOOOOO" Chin and his reasoning. It got a nice response. I'm such an ass. Enjoy.