Mr. Postman look and see, oh yeeeeaaaah, if there's a box of HK goodies for me.... 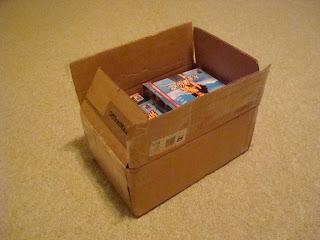 That dirty enchantress who keeps shoving her irresistible HK goodies in my face strikes again! Ebay. That naughty minx took my money and ran again, but instead of a social disease and drug store run for antibiotics and 'special' shampoo, she left me a box full of Shaw Brothers! Hooray! 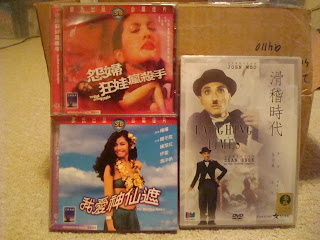 Ok. So LAUGHING TIMES isn't a Shaw title. So what of it? The rest of the box is chock full. Above, along with John Woo's 1980 comedy LAUGHING TIMES (which after I purchased, realized I already had this exact dvd) are the early 80's comedy/fantasy MY DARLING GENIE, with Derek Yee Tung-sing and the sorely missed Cherie Chung Cho-hung, and the 1980 adult drama THE STUD AND THE NYMPHO. Guess which one I will be watching first? 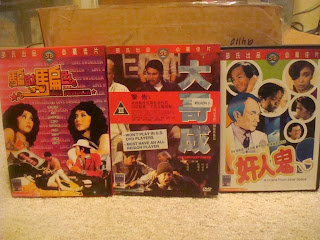 The 1976 comedy LOVE SWINDLER, stars Yueh Hua (who to me looks like Patrick Tam Yiu-man. Are they related?) and a bevy of Shaw's stable of 70's beauties including, Shirley Yu Sha-li, Siu Yam-yam, Chen Ping, and Dana. 1975's BIG BROTHER CHENG is the follow up to the excellent 1974 triad/ comedy/ social commentary-drama THE TEAHOUSE, both starring Big Brother Chen Kuan-tai. Overjoyed that I finally get to see the sequel. Just loved THE TEAHOUSE to bits. Next up is the 1984 comedy/ ghost/ fantasy A FRIEND FROM INNER SPACE, starring Ti Lung, Josephine Siao Fong-fong, Sek Kin, and Nat Chan Pak-cheung. A few months ago, via my lovely lady Ebay, I was able to pick this film up on VHS as well. 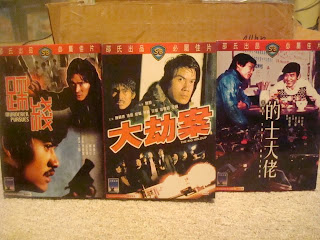 The 1980 crime flick MURDER PURSUES looks like a goodie. It stars Danny Lee Sau-yin, Ray Lui Leung-wai, Kent Cheng Jak-si, and Parkman Wong Pak-mak. This one immediately jumps to the front end of the queue on name talent alone. After THE STUD AND THE NYMPHO, of course. Chor Yuen directs 1975 crime actioner, THE BIG HOLDUP. This one stars Chen Kuan-tai, Yueh Hua, Danny Lee Sau-yin, and Lam Jan-kei. Jan-kei is the freaky star from Tsui Hark's, DANGEROUS ENCOUNTERS-1ST KIND aka DON'T PLAY WITH FIRE. Once you see her mug you'll never forget it. I still can't shake the scenes of her mouse-al abuse. Poor little mice. And finally, the 1975 action/ drama THE TAXI DRIVER. I have always been interested in the film because of the title being similar to my favorite American film, TAXI DRIVER. The Shaw title came out a year before and is most likely world's apart from what Scorcese put on display. We shall see.
Posted by Kingwho? at Wednesday, March 03, 2010