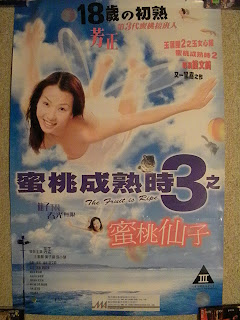 Yet another ancient review I wrote for cityonfire.com. Plus a pretty sweet poster of the film THE FRUIT IS RIPE 3, featuring the adorable Jay Fong Ching. THE FRUIT IS RIPE 3 is supposedly the third installment in an unrelated trilogy which began with 1993's CRAZY LOVE starring Loletta Lee, and followed by 1997's THE FRUIT IS SWELLING, which included Shu Qi in a brief role. The only tie these films seem to share is the abundance of flesh revealed and the same director helmed this film as well as the latter production. I suppose they are similar in theme as well, being"coming of age" or "sexual awakening" stories. Soft core auteur Cash Chin Man-kei, who's film career revels in soft core genre goodness (he was affiliated with Wong Jing in his early career. If that helps any?), stays playful with the mindless story line and packages more human bark than most category III films. The plot of this film stops propelling forward every five minutes or so to shed some clothing and lather up for the camera. By no means a bad thing. Off the bat we're introduced to the film's nubile heroine Peach; surrounded by naked man ass in a locker room shower. The charming Peach is a cupid-like angel cast out of the clouds to receive more training in the ways of love. Sounds like a warped late night skin flick version of IT'S A WONDERFUL LIFE. Peach thankfully filling the Clarence role. 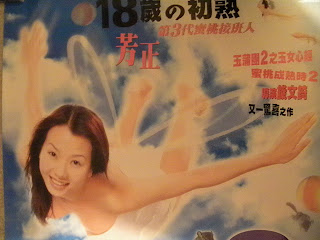 Her task on earth is to convince the reserved Urchin, played by Jimmy Wong Shu-Kei, to confess his love for the apple of his eye since childhood, Shirley Cheung Siu-wai. After gobs and gobs of glorious nudity, including a girl/girl bubble bath (HOORAY!), Urchin and Peach fall for each other. AWWWWWW! But this can't be? Peach is not of this earth and Urchin is as mortal as we come. But the script says otherwise. Taiwanese beauty Jay Fong Ching plays Peach and for the better running time of the production lacks designer threads. Her performance is anything but restrained and is funny to watch (though whoever provided her dub should lay off the helium). As with most quickie productions the contrivances in the script for THE FRUIT IS RIPE 3 are transparent, but who cares? Not me. All involved "pull off a stunt" in taking a lame idea and modeling, at the very least, a decent scantily clad time waster.

Cash Chin Man-kei has had somewhat of a soft core resurgence in the last couple of years, directing the period piece nudie THE FORBIDDEN LEGEND: SEX & CHOPSTICKS and it's skin filled sequel THE FORBIDDEN LEGEND: SEX & CHOPSTICKS II. Most HK film lovers may know Chin for some of his excellent CAT III classics THE ETERNAL EVIL OF ASIA and SEX AND ZEN II. He also wrote ETERNAL EVIL OF ASIA. Anyone with a warped enough imagination to turn Elvis Tsui Kam-kong's head into a penis is OK in my book!