Once Upon a Kung Fu Double Bill 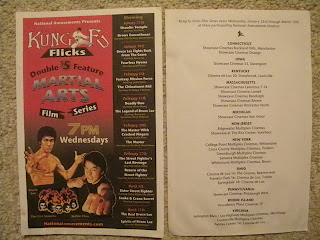 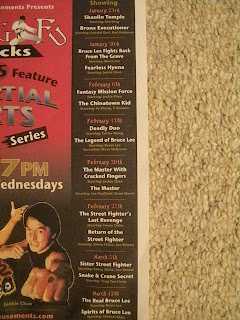 Kung Fu vs. Berber
I don't know when this promotion took place but I wish I was notified!? AMC theaters held a Kung Fu double bill once upon a time. There is no year offered on this flyer so who knows when this mainstream theater coolness took place? Any ideas? A double bill for 5 bucks!? I'm there. I bought these flyers off of Ebay for about $3, shipping included. What the hey? I can afford it. One less energy drink. February 6th looks like a goodie: FANTASY MISSION FORCE and THE CHINATOWN KID. I would love to see FANTASY MISSION FORCE on the big screen. Oh what fun! I like how they have a photo of FIVE DEADLY VENOMS but the actual film isn't being shown!? Seeing as it was AMC Theaters putting on this Kung Fu display, I suspect there prints were less than legit. Xenon? Shaolin Dolemite Collection? Their Kung Fu stance is weak!
Posted by Kingwho? at Friday, March 26, 2010